Anybody who has read my book What’s So Confusing About Grace? knows my story. I was raised in a fundagelical church that focused on culture war issues. In the early 1990s, I was a Rush Limbaugh fan, I listened to James Dobson and the Bible Answer Man on the radio, and I was ready to fight in the war against Christians and for general “moral decency”.

If you want a great example of Randal Rauser, Conservative Culture Warrior, consider this letter to the editor I just found it in a box in the basement. It was published by The Province, a Vancouver newspaper, on October 12, 1994. And in it, I express anger — nay, outrage! — at the fact that CBC Newsworld (a cable news channel in Canada) aired a Polish documentary on the fall of communism that included scenes of graphic nudity. This was sufficient for me to label the documentary as “thinly disguised soft-core porn” and to bemoan the treatment of those who protest it as “right-wing Christian fundamentalists.” In the letter, I insist that I really do care about free speech: nonetheless, I implore CBC Newsworld, “For the sake of decency, please keep it out of my living room.” Of course, “for the sake of decency” I could just turn the TV off or cancel my cable. But no, the only solution I consider is for CBC Newsworld not to air content I might deem offensive. You can see how much I care about free speech!

Here’s the best line: “It’s time to clean up the media for the sake of our children.” Uh huh. I mean I totally get that: we must ensure that all the foreign political documentaries aired on cable news channels are appropriate viewing given the sizable children’s audience that they are sure to attract.

Randal Rauser Conservative Culture Warrior uses some big words and can definitely write with stentorian moral indignation and a brittle martyrdom complex. But wow, are his arguments unimpressive. 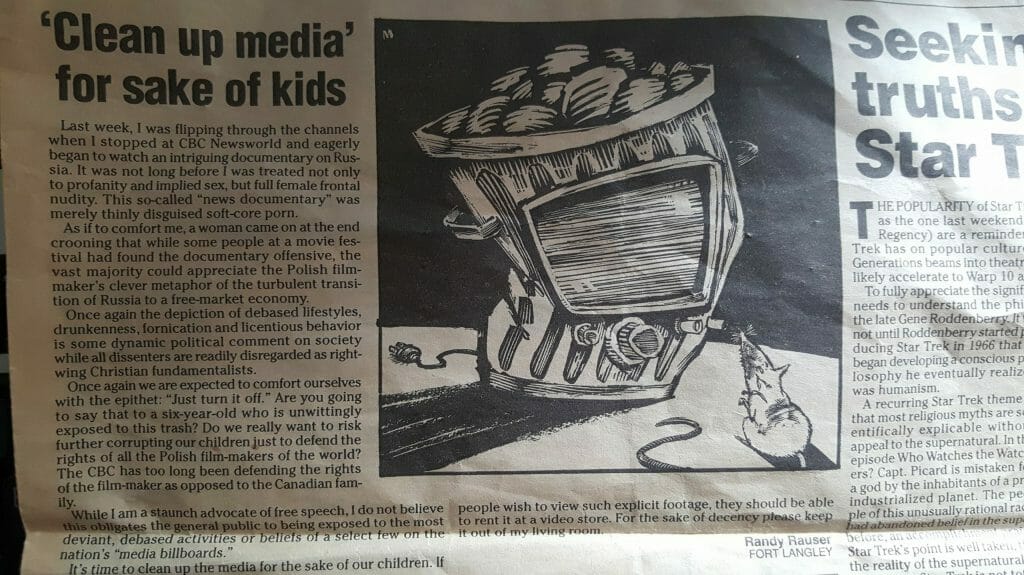