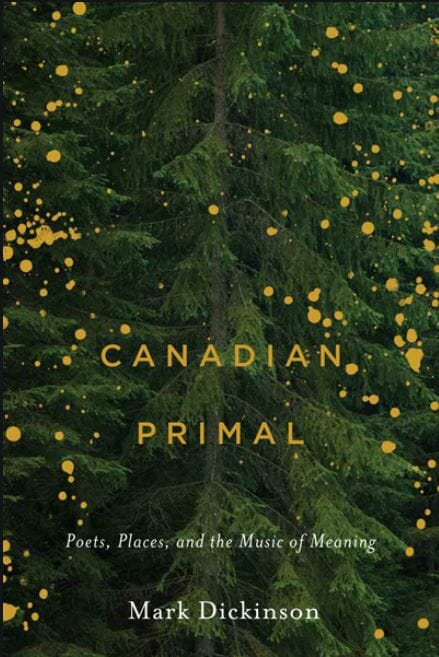 It was a rainy afternoon in February in the late 1990s and I was jogging by Fort Langley (east of Vancouver). The clouds had been socked in heavy and dark for days blocking out the spectacular, jagged peaks of the North Shore mountains. And it left me feeling dark and claustrophobic.

That experience came back to me as I read Canadian Primal, an impressive new book by scholar (and personal friend) Mark Dickinson. Equal parts biography, philosophy, and literary exposition (with just a dose of literary criticism), the book weaves together the stories of five Canadian luminaries that Dickinson calls the “Thinking and Singing Poets”: Dennis Lee, Don McKay, Robert Bringhurst, Jan Zwicky, and Tim Lilburn.

The group is impressive in their diverse and eclectic experiences and interests: Lee, icon of Canadian publishing best known as a children’s poet of such literary classics as Alligator Pie; McKay, long-time editor and dedicated birdwatcher; Bringhurst, restless globetrotter of towering intellect who seeks to retrieve lost indigenous voices; Zwicky, razor-sharp analytic philosopher disenfranchised by the limited horizons of the discipline; and Lilburn, wandering mystic sourced in the Christian tradition.

Diverse though they may be, and spanning the country from Victoria to St. John’s, these five poets together invite us to seek the ‘primal,’ a transformative experience that becomes constitutive of one’s identity. Canadian Primal weaves the lives, poetry, and primal experiences of these five poets in a sort of apprenticeship of awareness for the reader. As Dickinson puts it, “a whole other world is hidden in plain sight all around us. They offer five different paths to that world….” (230)

The poets are well honored and we are well served by our guide: Dickinson’s erudition and reverent passion for his subject matter are on display with every finely crafted sentence. So it is not at all surprising to learn in the “Personal Coda” that the project was nearly 18 years in the making. It shows.

As I said, while reading Canadian Primal I thought of the darkness and claustrophobia of yet another rainy afternoon in greater Vancouver. The reason this experience came to mind is because of what came next. As heavy raindrops began to fall yet again, I experienced something of an epiphany. Rather than perpetuate the futile human absurdity of cursing the weather, I decided to take that moment as an invitation. Rather than complain that the sun and sky and North Shore mountains were now inaccessible to me, I opted to take those raindrops as an invitation to shift my gaze downward. And so, I paused my run and knelt down to examine the thick ferns and grasses jostling for position on the shoulder of the trail, each one cradling dozens of crystalline raindrops in a wonderland of fecundity. At that moment, I knew that I had a decision going forward: would I choose to live a life that curses the sky or one that exults in the foliage?