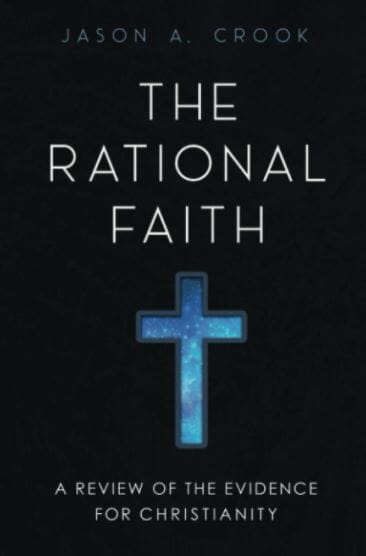 If you have read the first installment of my review of Jason Crook’s new book The Rational Faith (for Part 1 see here) then you know that I got sidetracked by outlining my disagreement with the way Crook sets up the topic historically in chapter 1, “The Cult of Reason.” In this second and final installment, I have decided to focus and will offer a critical response to the final eight chapters. I do find that I continue to have many deep disagreements with how Crook argues his case. In some cases, I see the difference as indicative of weaknesses in the book. In other cases, I see it as simply a distinct approach written for a particular audience (an audience that doesn’t include me).

One thing I do want to stress at the outset: Crook is a very smart fellow and he reasons multiple points in-depth in various fields including history, philosophy, hermeneutics, and science. However, that does create a weakness at points in the presentation. In short, at times, Crook is in danger of losing the lay reader with an overly-technical treatment of his subject matter. Consider, for example, this passage which is part of an extended argument for God’s existence given the problem with abiogenesis:

“Not only would all the necessary components of Benner’s 100-nucleotide example have needed to be present at once, they all would have needed to possess the same chiral ‘handedness’–despite such homochirality not arising in random samples. A nucleotide of that length is, statistically, ‘certain to be “unique” [given that] the overwhelming majority of sequences cannot be realized in principle, simply because even the whole Universe is too small for that.'” (56)

I don’t understand what that means, and I have no doubt that many other benighted readers like me will be lost by an argument written with that level of technical detail and specialist nomenclature. The lesson: in an argument aimed at a general readership, one needs to explore ways to explain complex concepts in simple and memorable terms (I think, at this point, of Van Inwagen’s illustration of the universe-generating machine  in order to illustrate cosmic fine-tuning. Crook needs more creative analogies like that.)

The abiogenesis argument is one of two arguments presented in chapter two for the existence of God, the other being a cosmological argument. This is an interesting section, one that demonstrates Crook’s knowledge of the history of cosmological arguments. However, while he eventually focuses on a kalam version of the argument, he doesn’t engage with the most up-to-date analysis (of what is, admittedly a very sizable literature). That leaves his argument feeling somewhat underdeveloped.

Probably the least persuasive chapter in my view is the third where Crook seeks to establish the true religion by way of two criteria: “natural harmony” (the religion must cohere with our understanding of nature) and “the nature of evil” (it must account for the existence of evil). I won’t say anything about Crook’s treatment of other major religions here except to note that his summary dismissal of Hinduism, Buddhism, Mormonism, Sikhism, Taoism, and atheism (but notably, neither naturalism nor deism) strikes me as very far from steelmanning.

However, the point I want to focus on here is how weak it seems to me that Christianity, and the Bible, in particular, fare by these criteria. To be sure, Crook doesn’t think so: in particular, as regards the harmony with science he emphasizes that the Bible matches belief in a finite origin of the world. To be sure, not all theologians agree with that claim (see, for example, Gerhard May, Creatio Ex Nihilo: The Doctrine of ‘Creation Out of Nothing’ in Early Christian Thought). But the main issue is that Crook is subject to the cherry-picking objection: why that criterion rather than, for example, the fact that the Hebrew Bible assumes the background of an obsolete ANE three-storied universe that includes a hard dome that holds up waters in the sky, a flat earth, and a realm of sheol underneath the earth?

In terms of explaining the problem of evil, Crook’s theodicy comes in chapter 7, “The Great War” and it consists of a conventional appeal to free will. Notably, Crook makes an important point of attributing the initial fall to a literal demonic rebellion in heaven (164-65). Not only will this look hopelessly mythological to the average skeptic (presumably among the audience Crook wants to reach) but it leaves unaddressed the question of how this demonic rebellion and the subsequent human fall are to be reconciled to the fossil record on planet earth (e.g. carnivory, predation, mass extinctions, parasitism, etc.) all eons before the appearance of human beings. And that brings us back to the criteria for genuine religion: without some greater explanation here, the biblical materials appear to fare poorly indeed as regards the “natural harmony” criterion.

Chapters 4-6 address the creation, transmission, and authenticity of the Bible. Once again, this section demonstrates well Crook’s deep and wide learning in the subject matter. But as I read I also found myself distanced from the argument because I simply don’t accept his assumption that one ought to accept the entirety of the biblical narrative as historical. Yet, from arguing for the existence of Balaam (132-33) to a global flood (127 ff.), Crook takes up causes that I think are dead ends apologetically (and scientifically). For example, on page 131 Crook defends the claim that the earth was flooded in part by waters from the deep by appealing to the precedent of water geysers erupting on Saturn’s moon Enceladus. Despite such, ahem, creative suggestions, the fact remains that global flood geology is a relic of the nineteenth century, one that is universally rejected by geologists. (Nor, for that matter, is this the favored reading among biblical scholars.)

Chapter 8 focuses on Jesus and this chapter perfectly captures both the strengths and weaknesses of The Rational Faith. Crook spends almost no time on the historical argument for the resurrection (though he addresses it in another chapter indirectly by arguing for the extraordinary conversion of Paul and the criterion of embarrassment as validating the women’s testimony at the tomb). Instead, he devotes much of chapter 8 to arguing for christological interpretations of various biblical prophecies ranging from Isaiah 7:14 to Isaiah 53. This argument exhibits weakness insofar as many skeptics will view such readings as hopelessly fanciful and eisegetical despite Crook’s bold claim that “Jesus is the sole figure in history who satisfied the Messianic prophecies of place, time, and character.” (184) That said, it is also a strength insofar as Crook provides an impressively sophisticated case for the weight of prophetic testimonial evidence: if the old prophetic fulfillment arguments are to return to the mainstream, it may well be through a careful treatment like this.

To sum up, as I have said, I found myself at a significant distance from Crook’s perspective throughout much of this book. But even if I remain personally unpersuaded by much of his case, I consistently found him to present an interesting, unique, fresh, and rigorous voice to the current apologetic discussion.

My final word: As I noted in part 1 of my review, Crook has priced his book at a paltry $6.99 (softcover) and a rock-bottom 78 cents for Kindle. As the saying goes, with prices like that, you can’t afford not to buy!