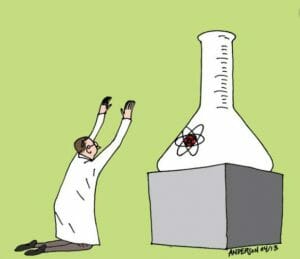 This article continues my survey of how atheism relates to other (commonly associated) concepts. Previously, I addressed skepticism and materialism. In this installment, we take on scientism.

Over the years, the great naturalist E.O. Wilson has appeared to court deism. But deism is merely a footnote in his book Consilience. The beating heartbeat of that book is Wilson’s conviction — dare we call it faith? — that scientific inquiry might one day provide a unified and all-encompassing understanding of reality. Wilson recalls that his own drive to understand the world was born in childhood: “I saw science, by which I meant (and in my heart I still mean) the study of ants, frogs, and snakes, as a wonderful way to stay outdoors.”[1] Amen to that! However, for Wilson that initial love of science gave birth to the staggering vision that a completed science could one day provide a comprehensive explanation of the totality of existence ranging from the trajectory of a subatomic particle straight up to the beauty of a Schubert sonata.

Wilson’s Consilience provides an eloquent defense of scientism, the idea that natural science is the paradigm and model for all knowledge. But my favorite succinct definition of scientism comes from philosopher Wilfred Sellars who clearly took his inspiration from Protagoras. He wrote: “science is the measure of all things, of what is that it is, and of what is not that it is not.”[2] Even more concise is Richard Lewontin: “Science is the only begetter of truth.”[3] The common idea is that genuine knowledge is properly scientific, that science provides a unique and authoritative window on existence.

Scientism fits well with naturalism, for if the closed system of nature exhausts reality then it is not a leap to expect that the rigorous scientific study of that world would exhaust knowledge of reality. So it isn’t surprising that contemporary atheists often view themselves as closely aligned with science while touting their very high estimation of the power and promise of scientific inquiry. The perception is reinforced by the fact that some prominent scientists are deeply involved in the polemical defense of atheism, the late astronomer Victor Stenger and evolutionary biologist Richard Dawkins (widely touted as the world’s leading atheist) being among them. As Stenger puts it, “The new atheists write mainly from a scientific perspective.”[4] He adds that in his view this accounts for their dismissiveness of other forms of knowledge discourse, specifically theology: “All of us have been criticized for not paying enough attention to modern theology. We are more interested in observing the world and taking our lessons from those observations than debating finer points of scriptures that are probably no more than fables to begin with.”[5]

Underlying Stenger’s optimistic view of science as a key to unlocking all reality is a commitment to a set of claims he refers to as “Scientific naturalism.” He summarizes this view with several principles including a belief that God does not exist, nature is “self-originating,” and the following apparent endorsement of scientism: “all explanations, all causes are purely neutral and can be understood only by science.”[6] Given examples like this, it is hardly surprising that many people link atheism to scientism.

But while it is popular to link scientism to atheism, the fact is that we can find theists endorsing scientism and atheists repudiating it. As an example of the former, consider again E.O. Wilson, an apparent deist, who weds belief in God with one of the most robust defenses of scientism from the last few decades. On the other end, there is no shortage of atheists who reject scientism. Here I’ll note the interesting example of respected analytic philosopher (and atheist) Laurence BonJour. In his book In Defense of Pure Reason,[7] BonJour offers an extended defense of what philosophers call synthetic a priori knowledge. While scientism is empiricist in nature, synthetic a priori knowledge is rational and intuitive as it promises an immediate grasp of the world of concrete reality and abstract possibility through reason alone. To be sure, BonJour does not dispute that empirical study provides one essential source of knowledge about the world. But his point is that one can also gain knowledge through rational intuition and BonJour develops powerful and nuanced arguments in defense of his case. My point here is not to assess the adequacy of BonJour’s arguments. Instead, it is sufficient to note that BonJour is an atheist who explicitly rejects scientism.[8] Consequently, one should not equate atheism and scientism or suggest that there is an entailment relation between them.

[3] Cited in Conor Cunningham, Darwin’s Pious Idea: Why the Ultra-Darwinists and Creationists Both Get it Wrong (Grand Rapids, MI: Eerdmans, 2010), 266. Paul Moser and David Yandell “every legitimate method of acquiring knowledge consists of or is grounded in the hypothetically completed methods of the empirical sciences (that is, in natural methods).” “Farewell to Philosophical Naturalism,” in Naturalism: A Critical Analysis ( ), 9.

[5] Stenger, The New Atheism: Taking a Stand for Science and Reason,13.

[6] Stenger, The New Atheism: Taking a Stand for Science and Reason, 160. He also adds materialism.