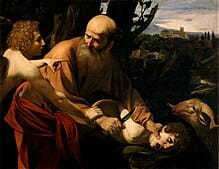 When Abraham expressed the willingness to sacrifice Isaac, he did so on the belief that God would raise Isaac back up and thereby be faithful to his covenant. The belief that God is faithful is laudable. The problem is that Abraham believed God was commanding an action — child sacrifice — that was considered to be morally heinous as a test of God’s faithfulness.

People are often not shocked by the Akedah (the Binding of Isaac) as they should be because it is familiar to them. So let’s recast the story in the terms of the unfamiliar. Imagine how shocking it would be if Abraham had a daughter and God commanded that she should be raped by a Philistine. And Abraham acceded to the request based on the belief that God would restore his daughter’s virginity miraculously in parallel to the belief that God would restore Isaac’s life miraculously (e.g. by miraculously restoring the hymen seal). And so, Abraham takes his daughter on a journey into the wilderness to meet the Philistine, all while anticipating her rape followed by the miracle to come. And God intervenes and prevents the rape.

Is that an inspiring story?

The question the reader must consider is this: are actions like child sacrifice and rape moral atrocities? The answer, surely, is yes. The second question is this: could a morally perfect being command actions that are moral atrocities as a means to test one’s faith in that being? Further, could that morally perfect being command those actions with the intent that the human person believes they were indeed being asked to carry out a moral atrocity such that expressing the willingness to do so would constitute a morally laudatory exercise of faith on the part of the human person?

If you say “Yes” to that second question, you are saying that it is possible that God would command moral atrocities as tests of faith such that the willingness of human agents to carry out those moral atrocities constitute morally laudatory exercises of faith.

That is an extraordinary conclusion for it means that, in principle, God could command an endless list of moral atrocities: child-killing and sacrifice (e.g. partial dismemberment, draining of blood from the corpse), rape, torture and mutilation, cannibalism, as tests of faith wherein God could act supernaturally to restore the prior state subsequent to the atrocity.

Conversely, if you conclude that this is not possible, you have powerful extra-biblical reasons to conclude that, however you choose to read the Akedah, it should not be read as constituting an affirmatory answer to the second question.