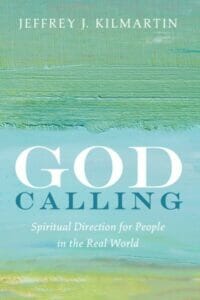 God Calling by Jeffrey Kilmartin is a spirited and somewhat iconoclastic survey of a range of topics pertaining to spiritual direction such as discerning God’s will, identifying one’s calling, praying effectively, pursuing spiritual disciplines, and engaging in spiritual warfare. It is one of those books that prompted vigorous agreement and disagreement in equal measure. In this review, I will focus on identifying some examples of each. And given that I want to end on a positive note, I will begin with the points of disagreement.

My biggest disagreement pertains to Kilmartin’s method which, in my estimation, evinces a significant degree of biblicism. By ‘biblicism’ I mean to refer to a theological method that attempts to derive Christian doctrine and practice solely from explicit biblical statements/precedents to the exclusion of extra-biblical sources such as tradition, reason, and experience. As Kilmartin puts it, “we Baptists pride ourselves on having the Bible as our ‘only guide for faith and practice.'” (49) Kilmartin appears to interpret that Baptistic position as requiring that for a doctrine or practice to be defensible, one must first look for a precedent for it within the Bible. Thus, if one lacks a precedent in the Bible then a view is ‘unbiblical’. For example, Kilmartin rejects the disciplines of silence and solitude based on the fact that “I do not see them in my Bible.” (142) Additionally, because he cannot see Ignatius of Loyola’s ‘prayer of disinterest’ in the Bible, he concludes “I reserve the right to remain extremely suspicious of it all.” (142) (For additional examples, see 147, 165, 177.)

The problem is that the Baptistic stance to which Kilmartin appeals is itself an extra-biblical tradition. What is more, there is no precedent in the Bible for assuming that a doctrine and/or practice must be present in the Bible in order to be acceptable to the Christian. Thus, this kind of biblicism is, strictly speaking, self-defeating since it must appeal to an extra-biblical tradition for its justification.

In my view, the biblicist stance of the book skews the analysis negatively in some important ways. For example, Kilmartin states that particular ascetic practices in the spiritual disciplines can be traced back to extra-Christian origins/precedents which he then labels as having a “pagan genesis” (141). Thus, he concludes that spiritual disciplines derive “From paganism via the Catholic monastic tradition.” (143) In this way, Kilmartin thereby rejects the value of tradition and assumes, without argument, that a precedent outside the Judeo-Christian tradition automatically taints a practice as “pagan”. Further, Kilmartin adds, “what the ‘world’ knows about mind and body needs to take a backseat to the biblical program of sanctification and transformation.” (143) What is left unclear — and disturbingly so — is whether Kilmartin is open to the insights of the social sciences or other non-Christian sources of knowledge (e.g. evidence for the value of mindfulness; virtue theories of ethics) with respect to ‘transformation’.

My second disagreement pertains to Kilmartin’s tendency toward uncharitable polemics. For example, not only does Kilmartin critique Dallas Willard’s argument that God has preferences which we should seek to discern, but he labels Willard’s view (or implications that flow from it) as “foolishness” (23). While I am sympathetic to Kilmartin’s alternative advice to focus on becoming like Jesus, I don’t think his critique of Willard is fair. Nor am I persuaded that he establishes that Willard’s view of conversational prayer is “unbiblical … spiritually harmful, and detrimental to the spreading of the gospel.” (110) (I do agree, however, with his additional charge that it is unnecessary.)

Perhaps the chapter with which I struggled most was the eighth in which Kilmartin addresses “Hyper-Spirituality.” He refers to hyper-spirituality as spirituality pursued in an unbiblical or ungodly manner (146). While I agreed with several of the examples in his biblical survey, he goes on to flag “omnicausality” (166 ff.), as part of the problem. However, his definition of omnicausality appears to indict Calvinism, Thomism, and even classic Arminianism (cf. meticulous providence) as examples of unbiblical hyper-spirituality. Not only is that very implausible, but it leaves me wondering what Kilmartin’s alternative view of providence would look like.

Finally, I find at points that Kilmartin is overly pedantic in his critiques. For example, he devotes a section of his chapter on hyper-spirituality to this popular saying: “Find out where God is at work, then join him in it.” (171 ff.) While Kilmartin offers some legitimate caveats — for example, sometimes God begins to act as we set out in faith — it seems to me that his wholesale rejection of this maxim as “detrimental to the faith and practice of the church” (171) is simply overreading a pithy aphorism.

While I have enumerated several points of disagreement, I now feel compelled to highlight that a good book is not merely one with which you agree, but one which stimulates you to serious engagement. God Calling is consistently engaging and provocative and the first part of the review should be seen as a testament to that fact. Now as we turn to the second part, we will do so with an eye to the positive side of reader engagement.

I would argue that the central goal of God Calling is to bring spiritual direction out of the subjectivist, mystical fog and into the mundane light of day. And time and again, I find myself nodding in agreement at Kilmartin’s efforts. For example, as I mentioned above, I agree that there is far more wisdom to be found in close attention to the life of Jesus as a pattern of conformity for our own rather than on endless subjective speculations as to what God may be asking in a particular moment. (There is a perfect analogue here to the focus on cultivating ethical virtues rather than engaging in endless debate about the various pandora’s box ethical conundrums that often preoccupy professional philosophers.)

Kilmartin provides some judicious critique of the attempt to hear the voice of God speaking to the point where people appear to expect some sort of audible voice. At best, this results in the spiritualization of one’s own internal process of deliberation, but at worst it can lead to various sinful or unwise thought processes being baptized as the voice of God (72).

Equally bad, other Christians may become disillusioned and frustrated because they don’t hear God resulting in a faith that is “frustrated, challenged, confused, and sometimes even overthrown.” (68) Needless to say, this kind of theology can greatly exacerbate the problem of divine hiddenness as discussed in the philosophy of religion literature (cf. 111). I remember one specific occasion where I told an atheist friend that I experience God every day. I wasn’t meaning to suggest some sort of extra-mundane charismatic experience, but nonetheless my off-hand comment prompted this reply: “Why don’t I experience God?” Needless to say, charismatic expectations may indeed pave the road to skepticism. And so, Kilmartin is right to flag the danger such spiritual expectations can present.

While Kilmartin cautions against such incautious spiritualization, he is not a cessationist (80) and he remains open to God speaking in unique ways. The problem arises when such unusual moments are turned into expectations.

One of the best virtues of the book is the many little observations that Kilmartin makes about evangelical culture. For example, when speaking of the discernment of God’s will he observes, “Another ‘sign’ Christians seem to use is what might be called the ‘smoothness factor.’ If things run smoothly, so this theory goes, then it must be from the hand of God. If not, we can know that we have either gone ahead or lagged behind God’s ‘perfect timing,’ or have somehow missed the road.” (34) Such reasoning is indeed very common and Kilmartin’s ability to articulate and then critically examine it is very helpful. After all, once you have named the smoothness factor, you can begin to think critically about it and question whether it really deserves the weight placed upon it.

Kilmartin is also attentive to the ways that subjectivist accounts of spiritual direction and discernment can go awry. And while he may overstate the concerns at times, he is often spot on. For example, he warns of how the subjectivist tendency to ‘hear God’s voice’ is often used to solicit donations: “Pulling on heart-strings is a time-honored way of getting donors to part with their hard-earned cash, but for many Christians asking them to pray about such a matter is manipulation and constitutes spiritual abuse, since they will take their newly acquired guilt feelings and attribute them to God.” (41)

I will conclude with one additional insightful point. Kilmartin warns that “the teaching about ‘conversational prayer’ sanctions the cocooning and isolation of individuals, and encourages an unbiblical ‘Jesus ‘n Me’ attitude.” (108) While I think there is still room for conversational prayer in the Christian life, his point is well taken. Much that passes for spiritual direction today does conform to the individualist, consumerist, and subjectivist patterns of this world. On this and many other points, God Calling offers a distinct perspective on spiritual direction and discernment that is sure to enlighten and challenge. My thanks to Jeffrey Kilmartin for provoding a review copy of the book.

You can pick up your own copy of God Calling at Amazon.com where the Kindle version is a mere seven bucks.