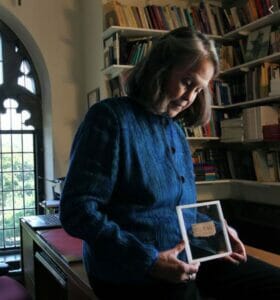 My problem is not with the idea that conservative Christian scholars may have a bias that informs the positions they take. My problem is with the implication that other scholars, whether Christian or not, don’t.

Consider, for example, the case of Morton Smith, a scholar who infamously promoted the idea of a “Secret Gospel of Mark,” one with deliciously scandalous gnostic and homoerotic themes. The evidence for that gospel was always scanty and it turns out it was, in fact, a hoax. (See Stephen Carlson, The Gospel Hoax: Morton Smith’s Invention of Secret Mark.) Despite this fact, Smith did manage to win over several scholars, some of whom promoted the Secret Gospel as the oldest of all gospels.

And now we have Ariel Sabar’s new book Veritas: a Harvard Professor, a Con man and the Gospel of Jesus’s Wife. Veritas tells the story of how Karen King, a respected scholar from Harvard, was tricked into promoting a forged papyrus document that referred to an alleged ‘wife’ of Jesus. From an outsider’s perspective, it appears that King was an unwitting dupe because she was so interested in looking for evidence — any evidence — that could justify her rewriting the origins of Christianity in a way more favorable to her particular brand of feminist interest.

The simple lesson here is that everyone — conservative Christians, liberal Christians, atheists, skeptics, and the rest — has a bias and we all need to be careful not to let our biases, whatever they may be, distort our scholarly work.