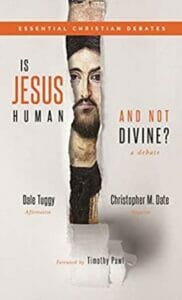 Jokes aside, the identity of Jesus Christ — “Who do you say I am? — is the heart of Christian faith: Is Jesus God’s human messiah or the incarnate Son of God? Many Christians will assume that basic question has been effectively settled, at least within the confines of orthodox Christianity. So it might seem a bit surprising to have it debated in a series titled “Essential Christian Debates”. However, not all professing Christians agree with the orthodox consensus. And whether or not denizens of that wider consensus view that minority report as genuine Christians, dangerous heretics, or something else, their carefully reasoned arguments deserve a hearing in the best sense of ironing sharpening iron.

So you’re probably wondering: who won? I’ll just say this: I wouldn’t look forward to debating either of these gents. Each is very informed about a diverse field of subjects as the book ranges over carefully reasoned exegesis (each debater assiduously avoids proof-texting), thoughtful engagement with the Patristics, and additional philosophical and theological considerations.

What is more, they don’t mind taking the proverbial gloves off and chiding each other. Though, I did think that at times, the side-bar critiques detracted from the overall work. For example, Date says “If you, the reader, reject the deity of Christ, I plead with you to do so for better reasons than Tuggy’s.” (95) The irony is that by lampooning Tuggy’s reasoning as poorly argued (which it isn’t), Date by implication criticizes the book of which he is a co-author.

Tuggy is the analytic philosopher and that comes through clearly. For example, he deftly analyzes the logical coherence of Date’s apparent move between one-self and three-self conceptions of the Trinity (e.g. 68-9; 123).  While Date appeals to the formula of God as one being in which three persons subsist (while the second person also subsists in human being (61-2)), Tuggy challenges the meaning, coherence, and exegetical bona fides of this phraseology (e.g. 70; 161-62). For example, Tuggy asks, “He doesn’t think I am the ‘human nature’ in which I supposedly subsist, so why should, say, the Father be the divine nature/being in which he subsists?” (162) Date pushes back by insisting that Tuggy is attempting to put God in a “proverbial box and shrink him down to human size” (185). But that sounds like little more than rhetorical bluster. For his part, Tuggy helpfully notes that other Trinitarians move beyond the being/subsistence distinction by articulating more defensible attempts to articulate Trinitarian and incarnational logic (163, n. 18).

While Tuggy’s analytical acumen is generally a boon to the debate, it is not always so. At one point, Date makes an interesting appeal to the aesthetic beauty of the orthodox narrative in which God is the self-sacrificing Father and he contrasts it with Tuggy’s lesser account of God choosing a humble human servant, Jesus, to be his mediator. Date observes, “It is a more beautiful, more inspiring story than the one told by Tuggy, in which the creator-father instead creates an exclusively third party to die in the place of other human beings.” (58-9) In his rebuttal, Tuggy attempts to reduce Date’s observation to a seven-step syllogism (73). But it seems to me that Date’s point is better understood not as an enthymeme but rather as a direct appeal to an aesthetic intuition.

While Date seems out of his element when discussing logic (e.g. 60-3) he is at home in biblical exegesis and the views of the early church fathers. In his opening statement, he puts his eggs in a handful of exegetical baskets, specifically pertaining to Philippians 2:5-7, Hebrews 1:2-3, and, somewhat surprisingly, the maternal bird metaphor of Matthew 23:37-8 and Luke 13:34-35. Strategically, this was a wise approach, and I found Date’s treatment of Philippians 2 to be particularly persuasive. Meanwhile, I was unpersuaded by Tuggy’s claim that Jesus’ use of bird imagery was disconnected from divine implications. In my view, Date also scored points when it came to the citation of Ignatius of Antioch’s high christology while Tuggy’s suggestion that the text was corrupted with later interpolations sounds to me like special pleading. Date also pointed out that Tuggy never responded to his citation of Melito of Sardis who certainly has one of the most striking christologies of the Patristic era.

Date and Tuggy have a spirited exchange about several other patristic theologians as well: I found their wrangling over Tertullian to be particularly instructive as I thought each debater scored points with this Latin theologian. And that brings me to a central issue: it seems to me that Tertullian (like most other Patristics) has a theology that very much represents a transitional form. In short, while I agree with Tuggy that we need to be careful about reading this third-century theologian anachronistically in the terms of later Nicene and Chalcedonian orthodoxy, I believe he clearly represents a significant step toward that orthodoxy. The question is whether that step was toward a fuller orthodox revelation or a derivation from an original scriptural deposit.

And that brings me back to an underlying assumption that seems to be held by both Date and Tuggy according to which we should expect that fundamental doctrines like incarnation and Trinity, if true, would have been held by the original Christians and New Testament authors. However, this is not an assumption I am inclined to accept. I think one would be far better off recognizing the degree to which the Spirit led the church into a fuller understanding over time (John 16:13) as Christians wrestled with and reflected on the Christian deposit of revelation in light of the lived experience of Jesus in community until that revelation reached a definitive form of articulation at the councils and creeds of the fourth and fifth centuries. In short, whether or not Luke or Paul or John held fully fleshed doctrines of Trinity and incarnation does not settle the question of whether we should do so.

It is a matter of some irony that this book, written by two very Protestant thinkers, should have a foreword penned by respected Catholic philosopher Timothy Pawl. Pawl offers the following particularly interesting response to the whole debate:

“the general impression is one of disquiet. Here we have two men, each thoughtful, each trying hard to serve the God he loves, each approaching the available data with prayer and the best tools we have available.” (xiii) And yet, they reasonably disagree about a very important issue: “the fact that God is trying to communicate something vastly important to his church Holy Scripture, something upon which, even in trying our best with the best tools and intentions, we as a community fail to find consensus.” (xiii)

Pawl concludes by wryly suggesting that the answer may involve reconsidering “the authority structure that God has left in place for his church, and whether or not God saw fit to provide a testifier to break these exegetical impasses…” (xiv) I am reminded at this point of John Eck’s warning to Martin Luther who insisted on reading Scripture and articulating doctrine apart from the authoritative guidance of a Magisterium:

“For what purpose does it serve to raise a new dispute about matters condemned through so many centuries by church and council? Unless perhaps a reason must be given to just anyone about anything whatsoever. But if it were granted that whoever contradicts the councils and the common understanding of the church must be overcome by Scripture passages, we will have nothing in Christianity that is certain or decided.”

I understand that some may indeed find Is Jesus Human and Not Divine? to be disquieting. But I found it exhilarating. For many reasons, I think Date is correct, but I also think that Tuggy provides an invaluable service by pressing Christians back to the biblical texts, Christian traditions, reason and experience. This book would make an excellent textbook for an upper-level undergraduate or seminary course in Christology. Even more, it provides an excellent guide for any Christian interested in a serious reflection on that age-old question, “Who do you say I am?”

To support the authors and the reviewer, you can pick up your own copy of Is Jesus Human and Not Divine? in hardcopy or Kindle.

And thanks to Dale Tuggy for sending me a review copy of the book.