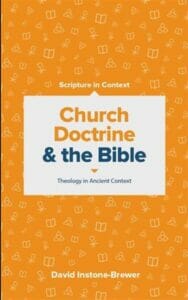 The latest entry in the Lexham Press “Scripture in Context” series focuses on the relationship between Christian doctrines and the Bible. Throughout the book, David Instone-Brewer, a research fellow at Tyndale House and specialist in Judaism in the first century, takes his knowledge of the Bible to explore the nuances of Christian doctrines, sometimes with surprising results.

There is a lot to like about this little book, but let me begin with some of the things I didn’t like. Here I’ll note three points. First, I found myself in disagreement with the very first sentence in the book: “Doctrines are the church’s conclusions about theology in the Bible.” (xiii) While the Bible is obviously central to the formation of Christian doctrine, it is reductionist to claim that doctrines just are conclusions about the theology in the Bible. Systematic theology is, in fact, a complex process of reflective equilibrium in which one reads the Bible in light of one’s theological tradition (e.g. Instone-Brewer’s baptistic tradition), cultural context, and informed by the best learning of every age including fields like philosophy and science. For example, my concept of the doctrine of God will be informed, to some degree, by a philosophical framework (e.g. perfect being theology) while my doctrine of creation will be informed by our current understanding of nature derived from natural science. Doctrines, such as we articulate them in every age, emerge from the complex interplay of all these factors.

Second, the organization of the 28 topics into three categories — Doctrines that Divide, Doctrines that Confuse, Doctrines that Matter — was arbitrary and, in my view, unhelpful. To begin with, many doctrines belong in more than one category. For example, Instone-Brewer categories the Trinity as a doctrine that matters but it surely also confuses. And it also divides, and I’m not just thinking of how unitarians and oneness Pentecostals are divided from orthodox trinitarians: one of the deepest fissures in Christendom — the filioque — is ultimately a debate over a Trinitarian question. What is more, some of the chapter titles don’t specifically reference doctrines at all: e.g. “The Role of Tradition” (chapter 2), “Church Divisions” (chapter 9), “Prooftexts” (chapter 10).

Third, I was at odds with some points of Instone-Brewer’s doctrinal articulation. For example, as regards the doctrine of the  Trinity he suggested that “our concept of three equal and separate persons is oversimplified” (153) but it wasn’t clear exactly what he was opposing or what he was proposing in its place. Neither was Instone-Brewer’s suggestion that we think of the Trinity analogously to an atom — God the Father is like the protons, the Son is like the neutrons, and the Spirit is like the electrons, (154) — particularly helpful. Ultimately, he is proposing a whole-part analogy (there is one God and each person is a part of that one God as there is one atom and each atomic particle is part of that atom) and it suffers the standard objections of logic and orthodoxy to all those analogies (e.g. egg; clover; river).

I was also dissatisfied with Instone-Brewer’s claim in the chapter “Acts of God” that rather than view God as acting punitively through nature, we could view God as foreknowing and appropriating natural disasters for punitive ends (85). First off, I think this claim does not conform with the description of many biblical texts: e.g. the flood of Genesis 6 was clearly purposed precisely for the end of punishing a wayward creation and starting over. Moreover, it seems to me that Instone-Brewer is proposing a distinction without a (moral) difference. In scenario 1, Yahweh punishes Sodom by destroying it with a volcanic explosion; in scenario 2, Yahweh foreknows a volcanic explosion will destroy Sodom and he allows that to happen for the purposes of punishing Sodom and destroying it with a volcanic explosion. How is the second view a significant amelioration of the moral problem presented by the first view?

While I found the analysis in the chapter on “Acts of God” to be unsatisfying, I was overall appreciative of the chapter for providing an honest and thoughtful engagement with a difficult topic. And the same can be said for the book overall. Setting aside the unhelpful three-part organization, the fact remains that the 28 chapters offer an engaging and eclectic range of topics. Those of a baptistic and Arminian bent will likely find the most to agree with. For example, I was very sympathetic with Instone-Brewer’s view of church governance (chapter 4), though predictably episcopal traditions will find very little they can agree with there.

That said, I believe that readers from all traditions will find much to challenge their assumptions (chapter 12 on “Remarriage” is a great example). The book would be a great conversation starter for a small group in church and could work very well as a textbook at a Bible college or undergraduate university introductory course to theology. Chapters on topics like “Hell,” “Sacrifice,” and “Justification and Good Works” strike a fine balance by providing a helpful overview to the topic while securing Instone-Brewer’s own conclusions with respect to his reading of the Bible and engagement with theology. As a bonus, the book includes many helpful illustrations and memorable anecdotes and is reasonably priced as well (a mere six bucks on Kindle!).

My thanks to Lexham Press for a review copy of the book.

You can support the author and reviewer by picking up your own copy of Church Doctrine & the Bible here.