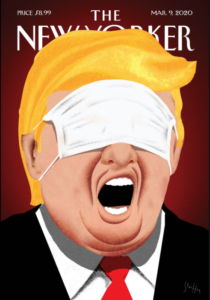 Recently, I’ve heard that Donald Trump refuses to wear a mask because he cares about the way he looks.

Funny, I would’ve thought that if he cared about the way he looks, he’d be more inclined to wear a mask.

That, of course, sounds like an insult, that is, a disrespectful or scornful remark about another person. And for that reason, many Christians will insist that it is wrong to have said it.

Maybe, but maybe not. Jesus regularly made cutting and incisive comments about powerful people who were abusing and victimizing others. For example, he called them white-washed tombs, a reference to the fact that their visible presentation looked respectable but their moral core was dead and corrupt.

Fair enough, you might think, this kind of language may be permissible if the target is a powerful person who is harming others and the language itself is intended as a specific indictment of that individual and his/her behavior.

But that’s not the case with my opening Trump joke, right?

Actually, no. That’s not correct. In fact, that opening quip is intended as an indictment very similar to Jesus’ language about white-washed tombs. The point isn’t that Trump is ugly. The point is that (1) Trump is completely lacking in self-awareness and awareness of how he is perceived by others and (2) Trump’s priorities are completely corrupt as evidenced, for example, in the fact that he cares more for his physical presentation than modelling responsible socially distancing and appropriate PPE.