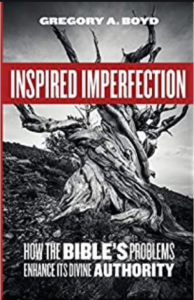 The postscript to Gregory Boyd’s new book Inspired Imperfection tells the story of a woman whose beloved vase was broken into several pieces. Devastated, she initially sought a restorer who might bring the ceramic back to its original, pristine condition. However, even the most precise restoration would likely leave discernable, hairline cracks in the finish.

Then she discovered a practitioner of kintsugi, a Japanese craft that reassembles broken pottery by way of a bright gold lacquer which highlights rather than diminishing or erasing the cracks. The result was a vase that was better than the original, not despite but rather because of the “beautiful scars” laced in gold. (Me being a car guy rather than a pottery guy, I couldn’t help but think of another analogy: the practice of incorporating a rust patina rather than a glossy repaint into a meticulously restored automobile.)

It’s a brilliant metaphor that eloquently captures the central thesis of Inspired Imperfection. Boyd recounts that it was in university more than forty years ago that he first encountered the ugly cracks in the Bible, cracks such as content that was scientifically problematic, internally contradictory, or straight-up immoral. This discovery shattered Boyd’s inerrantist understanding of Scripture and for several years he wrestled with ways to put the text back together in a way that would erase those ugly scars. But eventually, he came to realize that there could be no meticulous reassembly: “it began to feel to me like we were trying to move Mount Everest with a tablespoon.” (42)

It is at that point that many Christians have found themselves losing their faith altogether. But not Boyd. In a paradigm shift to a theological version of kintsugi, he became convinced that the problem lay with the perception that the cracks in the text were problems to be erased: instead, he determined that they should be laced with gold. Boyd also came to believe that Jesus has the Midas touch: in other words, Boyd’s restoration of the text was christologically framed.

Many other theologians have also proposed a christological way to deal with the cracks, though typically it is by way of an incarnational model: i.e. Scripture evinces both full divinity and full humanity (Peter Enns provides one of the best examples).

Incarnational models can address some problems: for example, understanding the degree to which God accommodated to human limitations in the kenosis of the incarnation could inform how God accommodated to human limitations in inspiration. To note one example, Boyd insists that we are misguided to be worried about whether Jesus really believed that Moses authored the Pentateuch: “The historical-critical debate over the various sources that comprise the Pentateuch would have been as far from Jesus’s mind as the nagging contemporary question of how to reconcile general relativity theory with quantum theory.” (67)

While incarnational models are adept at addressing human limitations in the text, they also have a rather glaring weakness. While Jesus was fully human, he was not a fallen human and thus his limited human cognitive awareness never evinced imprudence, let alone sin. By contrast, the text of Scripture does include actions/commands that are imprudent if not evil such as the horrific punishments in the Torah (stoning; burning; limb amputation), divinely commanded genocidal wars, and a collection of psalms replete with repeated curses of and hatred for one’s enemies. So at that critical point, the incarnational model breaks down (86).

Boyd has a few key interlocutors in the book. Karl Barth gets the most attention as the theologian who helped Boyd cut the Gordian knot by shifting the locus of revelation from the Bible proper to Jesus Christ, the one to whom the Bible witnesses. Barth also helped Boyd come to terms with the fact that “imperfections” in the text could be part of divine inspiration.

However, Boyd has since moved beyond Barth and he offers some well-articulated criticisms of Barth’s Neo-Orthodox account of Scripture by insisting on the importance of retaining a commitment to plenary inspiration: in short, the text itself is objectively revelation and not only the medium of it (70). (Boyd’s concern to defend the historicity of the main details of the life, death, and resurrection of Jesus also contrasts with Barth’s rather sharp contrast between historisch and geschichte (cf. 62).)

Though Jurgen Moltmann does not get the same attention as Barth, he is even more central to Boyd’s crucifixion model in which the apogee of divine revelation comes through Christ crucified (92). As Boyd says,

“we wouldn’t say that the cross fully reveals God in spite of the humanity, the sin, and the God-forsaken curse that Jesus bore. To the contrary, the cross fully reveals God precisely because it reveals a God who, out of unfathomable love, was willing to stoop to an unsurpassable distance to enter into solidarity with our humanity, our sin, and our God-forsaken curse.” (95)

Nerdy theological aside: It is important to understand that when Moltmann burst on the theological scene in the early 1960s, he was known, along with his fellow German Wolfhart Pannenberg, as a theologian who elevated the centrality of history as a means of divine revelation. God is known supremely through his actions in time. This involves a shift from Barth’s focus on the person of Jesus simpliciter as the locus of revelation to the person of Jesus as revealed in the events of his life, death, and resurrection. Moltmann views events as the locus of revelation, and the event of the crucifixion is supreme among them.

Needless to say, some critics will find this to be an ad hoc rationalization meant to defend a text that is, at points, indefensible. So it is important to appreciate how much effort Boyd exerts in defending the claim that this view of Scripture is, in fact, a natural and expected implication of a radical conception of revelation as finding its apogee in the crucifixion of God on a cross. Everything changes when you view Scripture through the lens of the crucified God.

So what do I think of Inspired Imperfection? Before I get started, let it be noted that this is a popularization of Boyd’s massive two-volume The Crucifixion of the Warrior God. I haven’t yet read the longer work, but Boyd is to be lauded for taking his ivory tower musings and both condensing and simplifying them for a popular audience. And with that, keep in mind that my criticisms of Boyd’s argument may well be addressed in that longer work. That said, Inspired Imperfection is the book I have and it is the book I’m reviewing. So let me begin by listing some points where I disagree with Boyd. Next, I’ll list some points where I would differ from Boyd. And finally, I’ll draw my overall conclusions about the book.

First up, I’ll list some of my points of disagreement.

Next, I’ll list some points of how my treatment of the issue would differ from Boyd’s.

And Now, the Conclusion

I could go on for awhile enumerating other examples where I disagree with Boyd or would do things rather differently. But to do so would be to abuse my role as a reviewer of the book Boyd wrote by instead talking about the book I think I should write.

It would also convey the wrong impression that I am unhappy with the book Boyd did write. Quite the opposite, in fact: it’s a very stimulating little book and my desire to engage it critically is a sign of its effectiveness. When I read Inspired Imperfection I find that I am reading a kindred spirit. Boyd has wrestled with the text in the manner that I believe should exemplify the raw honesty and boldness of God’s people (cf. Genesis 18:16-33). In Inspired Imperfection he offers a way to face Christian cognitive dissonance about the Bible head-on by viewing it through the cross. In that way, we may begin to see that the cracks of this shattered pot are in fact laced in gold.

Thanks to Fortress Press for a review copy of this book. You can order your own copy of Inspired Imperfection here.