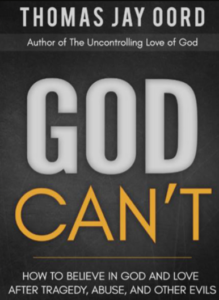 Last week, I posted a review of Thomas Jay Oord’s book God Can’t. While the book was well written with admirable pastoral sensitivity and compassion for those who suffer, I wasn’t particularly taken with the main argument. Not surprisingly, Dr. Oord was not particularly taken with my review and he posted a response here. Since I just can’t leave well enough alone, I will now respond to his review of my review. I will present excerpts from Dr. Oord’s comments indented and in red and then I’ll offer responses.

To begin with, Dr. Oord charges me with misunderstanding his view. But he then adds,

I suspect some of your misunderstanding would have been avoided had you read The Uncontrolling Love of God, as you admit. But I also know there are always more books to read than time to read them!

Whether I have misunderstood anything remains to be determined. But I do want to highlight, as I did in my review, that there is a tension when you are seen to be evaluating a person’s theology based on their popular presentation of it for a general readership. So it is worth noting, as Dr. Oord has, that he has a longer academic treatment of the same material. Those sufficiently intrigued to pursue his ideas in their fullest form should probably look to that book. However, by the end of my rebuttal, it should become clear why I am not as yet persuaded that the longer work will address my concerns.

A major misunderstanding occurs early on in your review. You wrongly claim my view says “action requires a body.” I don’t believe this and say so many times in the book. I often speak of God’s acting, despite not having a localized divine body.

I did cite several passages straight out of the book to support my interpretation. So if Oord is going to rap my knuckles, he should explain those passages.

In the first chapter, I clarify this point and illustrate by talking about asking my wife to marry me. I said that when doing so, I acted. But for the marriage possibility to become actual, my (then girlfriend) had to cooperate with my action. I then said a bodiless God acts each moment but cannot singlehandedly bring about the results of love.

I fear I may lose some folks at this point, so let me slow down and unpack matters with more precision. We are talking here about two individuals (God/wannabe bridegroom) and two spheres in which each desires to act (creation/the will of the beloved). Oord is suggesting that it is enough to say he has the power to act if he issues a marriage proposal even if it is rejected by the beloved. But since the beloved here parallels creation, he is in effect saying it is enough to say God has the power to act even if God’s action is, in effect, rejected by creation. And that is false.

Thus, Oord’s response is misleading, at best and it goes no distance at all to address the problem that he is proposing a God who is unable to bring about states of affairs in the world in precise analogy to a paramour who cannot persuade his beloved to reciprocate such that he is left singing Bonnie Raitt’s 1990 hit “I can’t make you love me.”

In this section of your review, you say a toddler can do things God cannot. I agree. A bodiless God can’t act in ways a toddler can act, because God has no localized divine body. God can’t flap wings like butterflies, because God is wingless. We could extend this in a wide number of ways. An incorporeal God cannot do what corporeal creatures can. Unless one is a Mormon (Latter Day Saint) who believes God has a body, this shouldn’t be so controversial for Christians.

I’m sorry, but I fear that Dr. Oord is engaging in obfuscation here which calls to mind the tactics of the Mormon missionary who uses familiar terminology to mask a revolution. His comment suggests that I am merely saying that God cannot tweak his nose because he doesn’t have a nose to begin with. And since that is a tautology, of course, that is true.

But theological revolutionaries have been known on occasion to dress up a revolution in the garb of the ordinary and commonsensical (cf. the above-mentioned Mormon missionary) and I fear that may be the case here. The issue is whether God can will to act in the world at least with the immediacy of a toddler who boldly piles his Duplo into a misshapen tower. If God can do at least this, if he can bring about a Duplo tower with an exercise of sheer will that would be just in the right place to prevent a heinous evil action, then why doesn’t he do so? In countless cases, it would take only one Duplo tower of sufficient size to stop the would-be perpetrator of a heinous crime. And yet, God doesn’t act.

The reason is clear enough. The whole drift of Dr. Oord’s revolution is that God never creates that perpetrator-frustrating Duplo tower because he is unable to do so. God is unable to accomplish even the action of a thirty-pound toddler playing with his Duplos. So all this talk about God being unable to tweak his nose because he has no nose strikes me as just so much obfuscation. What we in fact have in Dr. Oord’s theology is a god weaker than a toddler. And a god who is so emasculated that he lacks the power of a toddler is not a being that I am inclined to worship.

One way the tradition has dealt with the problem of toddler being able to do what a bodiless God cannot is to say God can control (in the sense of a sufficient cause) creatures. When God takes control of a toddler or butterfly, we can say God did something. God was the sufficient cause. But this view leads not only to problems with regard to creaturely freedom and butterfly agency. One wonders why this God doesn’t control creatures far more often to prevent evil. In other words, the problem of evil is exacerbated.

As an Arminian and libertarian, I don’t believe that God is the primary determining cause of free human action. But I do believe that God is omniscient and that omniscience includes knowledge of counterfactuals (so-called middle knowledge) and based on this God can oversee events within creation so as to actualize his meticulous will in a delicate dance with the unimpeded will of free creatures.

In the second part of my rebuttal, I will take on the rest of Dr. Oord’s statement. Suffice it to say that I am not persuaded that his view is anything less than a radical reconstruction of the concept of divine power, one which results in an impotent supernatural agent at some distance from the omnipotent deity of Christian piety and theology.