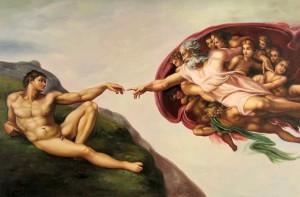 The creation of Adam … at apparently thirty years old.

The nineteenth-century naturalist and conservative Christian Philip Gosse infamously attempted to reconcile the apparent great age of the earth with his reading of Genesis 1 by proposing that God created the universe with apparent age. For example, God created the universe with “annual” layers of arctic ice extending back hundreds of thousands of years and with photons from galaxies millions of light-years distant from earth already in transit.

In short, creation is like a pair of brand new jeans purchased new with tears and worn knees: it looks old and nearly worn out but it is, in fact, fresh from the (cosmic) clothing rack.

Gosse’s apparent age thesis never won much support for one good reason: it is baldly ad hoc. In other words, the apparent age supposition is offered only to explain away the great age of the earth. Thus, there is no independent reason to adopt the thesis.

The apparent age thesis also faces another common objection: it makes God a deceiver. If you buy a new pair of worn jeans knowing that your friends will assume they are old jeans from the back of your closet, then you are guilty of attempting to deceive your friends. Likewise, if God creates the universe in six days a few thousand years ago knowing that the hundreds of thousands of “annual” ice layers and the photons created in transit will be interpreted as signs of great age, then God likewise is a deceiver.

Is that a good objection? Keeping in mind that the ad hoc objection may already provide sufficient reason to reject the apparent age thesis, should we also reject it on the grounds of an intolerable divine deception?

It seems to me that the issue is more complicated than that. Consider, for example, that countless numbers of people throughout history believed that the earth was a flat surface rather than a globe. And it isn’t hard to see why: the earth certainly seems to be flat from the perspective of most folk. Granted, the person watching a tall-masted ship sailing into the distance may notice the hull disappearing before the crow’s nest, but as far as cues of the earth’s sphericity go, that’s pretty subtle. It is hardly surprising that countless perfectly reasonable people concluded that the earth was flat.

And of course, that’s just the tip of the proverbial iceberg. What about the fact that the solid oak desk in your study is composed of vibrating packets of energy in empty space? And you thought it was “solid oak”! Shows how much you know, eh?

And what about the fact that colors are not in the things we perceive but rather are only in our minds? That firetruck isn’t “red”, for example. Rather, the fire truck has the dispositional property that produces a quale in my mind when I see it and I call that experience “red”. But there are no colors, as such, in nature. There are only dispositional properties to produce particular types of subjective experiences in conscious perceivers.

We could go on enumerating such examples of nature misleading us.

Suffice it to say, however, that it would be grossly overreaching to conclude that God was thereby deceiving people by creating the world with the actual characteristics that we have discovered it to have. Mutatis mutandis, it could well be that the universe appears to be old when, in fact, it is not so at all. It hardly follows that God would thereby be deceiving us.

To be sure, it might still be the case that God is deceiving us. That would depend on the divine intent in creating the world as God created it. But we can at least conclude that even if God created a young universe with the appearance of great age, it does not follow that God’s action was thereby deceptive.