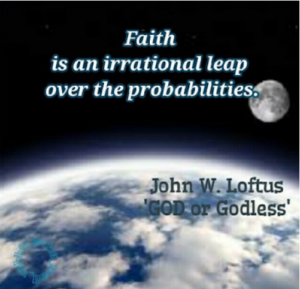 I can’t count the number of times I’ve seen an atheist cite 3rd-century theologian Tertullian’s statement “I believe because it is absurd” as evidence that “faith is irrational.” That’s equivalent to citing unemployed Miguel as evidence that “Mexicans are lazy.”

What is more, it’s quote-mining which does violence to Tertullian’s point. The passage (which appears in Tertullian’s book On the Flesh of Christ, a polemical response to Marcion), reads as follows:

“The Son of God was crucified; I am not ashamed because men must needs be ashamed of it.  And the Son of God died; it is by all means to be believed, because it is absurd. And He was buried, and rose again; the fact is certain, because it is impossible.  But how will all this be true in Him, if He was not Himself true—if He really had not in Himself that which might be crucified, might die, might be buried, and might rise again? I mean this flesh suffused with blood, built up with bones, interwoven with nerves, entwined with veins, a flesh which knew how to be born, and how to die, human without doubt, as born of a human being. It will therefore be mortal in Christ, because Christ is man and the Son of man.”

It should be obvious to any moderately charitable and sophisticated reader that Tertullian is using hyperbole to make a perfectly valid point. And what is that point?

In response to Marcion’s dismissive incredulity he is arguing that the plausibility of some truth claims is increased to the extent that they do not conform to commonly held assumptions. Tertullian’s thinking is like this: the Christian story of incarnation and atonement confounds common Greco-Roman assumptions about deity. It is not what you would expect to hear. In Tertullian’s view, this suggests that the genesis of the belief cannot be explained merely by appeal to recycled familiar tropes that circulated in the ancient world. Sometimes truth, as they say, is stranger than fiction. And the very strangeness of a claim can testify to its truth.

Now you may think Tertullian has a good point here or you may think he does not. But what you really can’t do is cite this single statement — “I believe because it is absurd” — as evidence that Tertullian was an irrational fideist, still less that “faith” is itself somehow irrationally fideistic.

For further discussion on the modernist anti-religious abuse of Tertullian’s words, see Peter Harrison’s article “‘I Believe Because it is Absurd’: The Enlightenment Invention of Tertullian’s Credo,” Church History, 86, no. 2 (2017), 339-64.

Note: Portions of this article were previously published in my 2014 article “Peter Boghossian’s Manual for Wasting Paper (Part 7): Doxastic Closure.”