What hath the cross to do with the gun? How does the peaceable kingdom that exists proleptically in the church relate to the realpolitik of civil government? And what guidance can we find for a Christian who finds themselves straddling these two worlds?

In this article, I interview Canadian apologist Stephen Bedard on his work as a military chaplain. Stephen is the Pastor of Queen Street Baptist Church, St Catharines ON and the Military Padre of Lincoln and Welland Regiment. He is the author of Unmasking the Pagan Christ (with Stanley Porter) and How to Make Your Church Autism-Friendly. You can visit him online at www.stephenjbedard.com 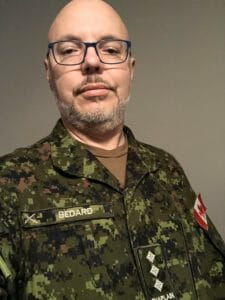 RR: Stephen, thanks for joining me in this conversation. The other day, I saw one of your tweets in which you wrote “Loving being back in military chaplaincy.” Over the years, I’ve known several military chaplains, and I’ve known many other Christians who were uncomfortable with military chaplaincy. Given that you’re a pastor and a Christian apologist, I thought this would be a good opportunity to hear your thoughts on the matter.

To start us off, could you say a bit about what your job as a military chaplain looks like and what your history with the military is?

SB: Thanks Randal for this opportunity.

I had no military experience before joining as a chaplain. I have family that belong to the Canadian Armed Forces (CAF) and who have deployed overseas. Although they are not religious, they commented about the impact of the chaplains (commonly called padres). I joined because I was pastoring in a town that was close to a military base. I got to know the chaplain on the base and had the opportunity to help as an on-call civilian chaplain while the regular chaplain was away. I loved the experience and began the joining process. I belong to the reserves, as opposed to the regular forces, and so I continue as a pastor of a local congregation as my main occupation.

One of the things that I appreciate about military chaplaincy (at least in Canada) is that there are three levels of ministry.

Very little of what I do is religious in nature. I have been in the CAF for almost eight years and just recently participated in my first military church service. There is no proselytizing, although I find that members of the unit (Christian and non-Christian) often ask questions about religion.

RR: What kind of training does a Canadian chaplain receive? Do you go through boot camp with the soldiers?

SB: Training in general for the CAF is an ongoing process. No one is ever done their training. But there are certain required training experiences.

It begins with Basic Military Officer Qualification (BMOQ). Chaplains start with the rank of captain and all officers must take the BMOQ. When I did my BMOQ, it was just chaplains in the class. Since then, chaplains now do their BMOQ with medical officers.

This basic training for chaplains is pretty much the same as that of other officers (e.g. marching, fitness, leadership training), there is one important difference. Chaplains are the only members of the CAF that do not receive weapons training. Even doctors, lawyers and public relations officers receive weapons training. The closest we get to a weapon is to learn how to make it safe if we find one unattended so that it can be moved without an accidental discharge.

Other than this basic training, we receive some chaplain specific training, including ethics and pastoral counselling. We also train with the soldiers in our unit, but never with weapons. If a chaplain was caught using a weapon, there would be consequences.

RR: Helpful background, thanks. So let’s dip into some of the concerns that some Christians might have with military chaplaincy. The good that a chaplain can do is undeniable. But a critic might worry that the Christian is forced to compromise too much to have that sphere of influence.

Imagine, for example, that an American chaplain is working with the marines in 2003 as they are invading Iraq. As a Christian, he has deep ethical concerns about the legitimacy of the war and its devastating impact on the civilian population. But as a chaplain in the marines, he is obliged to respect the chain of command and keep his head down. The military does not take kindly to prophetic protest. Can you see how this could introduce an ethical conflict for the Christian, a battle of loyalties? And if so, how would you propose navigating it?

SB: I cannot speak to the American system but I can about how things work in the CAF. All officers (not just chaplains) have to take courses in ethics and this kind of scenario is covered. The CAF is a voluntary military, meaning no one is forced to serve. We can request a release at any time.

When faced with a situation that we are struggling with morally, we have a number of options. On a smaller scale, any member (including a chaplain) can pass concerns up the chain of command. For example, if a unit was acting inappropriately in a specific village, a chaplain may be able to influence a change of behaviour. That would likely be ineffective on a larger scale, such as the legitimacy of a specific war or the overall strategy.

Such a member would then have to decide if they can in good conscience participate in such a conflict, even in a supporting role. If not, they would be best to resign their commission and be a prophetic protest as a civilian. There have been examples of high ranking officers (not chaplains) who have resigned their commission to critique a policy they could not while within the military.

Speaking for myself, I would follow orders and not publicly critique policy as long I was serving as a member of the CAF. If I ever thought that service would require a compromise of my Christian beliefs, I would resign my commission.

RR: That’s very helpful, Stephen. Thanks for clarifying. Now I’d like to ask you a more abstract question. As a Christian, I often find myself torn between the idealism of the pacifistic Christian tradition and the realism of just war theorists. With the former, I want to stand against the so-called myth of redemptive violence, but with the latter, I find myself drawn to the earthy realpolitik that recognizes violence will always be a part of our world and I might at least have a role in making it more humane.

The tension I feel can be captured in the story of Joseph-Ignace Guillotin, a follower of Jesus whose hatred of executions led him to propose a more humane mode of execution. On the one hand, if I’m going to be killed, a quick beheading is one of the least bad ways to go. But on the other hand, as a Christian I am chilled to the bone at the thought of having my greatest legacy being a more efficient means of removing a person’s head from their shoulders.

I suspect that as a military chaplain, you’ve got ample opportunity to wrestle with these questions. To put it bluntly, how do you balance taking up your cross (Luke 9:23) with taking up your sword (Luke 22:36)?

SB: I’m sympathetic with the tension you describe. I would much prefer that there not be any war and I look forward to the time when war finally comes to an end. I cannot speak for others but I am not hoping for opportunities for members of my regiment to have to go to war.

Now as a chaplain, I am not called to take up the sword. I will not be put into a position where I have to use a weapon against another person. However, I do support soldiers who are put into such situations.

I am able to support the military because I do believe that using force for the purpose of protection is appropriate. Not only are many of the soldiers not Christian and therefore not bound to Christian teachings, I don’t believe that the Bible prohibits the use of force to protect the vulnerable. I understand that is not universally accepted by all Christians. I have the advantage to not have to choose for myself whether or not to use force but I also happen to believe that there are acceptable uses of force.

RR: Would you be able to share an experience from your time as a chaplain? One example that might give us a better sense of the work you do and the difference it can make?

SB: I can’t give just one example of what being a chaplain is like. When I read your question, I was struck by the wide range of experiences I’ve had. I’ve provided pastoral care to members with PTSD, both Afghanistan veterans and those injured in their civilian employment. I have been able to pray with soldiers who are Christian and also made sure the faith needs of Muslims and Sikhs have been met. I have sat with Jewish and Muslim soldiers discussing the uniqueness of our own faiths and I have had non-Christians ask me questions about my faith.

I have had people ask why I didn’t just help out as a civilian pastor, providing care as called upon. For myself, military chaplaincy is one of the clearest examples of incarnational ministry. I wear the same uniform as them and have (mostly) the same training. I have opportunities for ministry that I would never have as a pastor coming from the outside. Being a military chaplain gives me the ability to minister from within and on their level. This seems to be the example that we get from Jesus and to a lesser example Paul.

I can only speak of my own experience as a Christian chaplain in the Canadian reserves. I have had many times driving home from the armoury feeling good about the ministry that has taken place. I feel thankful for the place that I believe God has placed me.