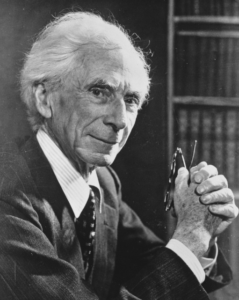 Russell about 60 years after giving up his briefly-held theism.

Time and again in conversation with atheists I find them insisting that theism is an essential component of religion. Indeed, it is not uncommon for them to conflate the two as if theism and religion were straight-up interchangeable.

To make my case, we will take a look at a fascinating moment in the journey of arguably the twentieth century’s greatest atheist: Bertrand Russell.

In this excerpt from his Autobiography, Russell discusses a period early in his academic career when he was under the sway of the Hegelian philosopher McTaggart. It was during that period that Russell had a brief but significant change of heart and mind:

“For two or three years, under his influence, I was a Hegelian. I remember the exact moment during my fourth year when I became one. I had gone out to buy a tin of tobacco, and was going back with it along Trinity Lane, when suddenly I threw it up in the air and exclaimed: ‘Great God in boots! – the ontological argument is sound!’” (p. 60)

To call an argument “sound” means two things: first, it is logically valid (i.e. the conclusion follows from the premises); second, the premises are true (and thus, the conclusion is as well). In other words, for this brief period, Russell became a theist and he did so by way of the ontological argument.

Here’s the important part: while Russell became a theist as he was walking along Trinity Lane, he did not thereby become religious. He did not join a community of likeminded belief and practice, he did not adopt any practices at all, he did not worship. He may have been a theist for that time, but his theism was wholly intellectual. In much the same manner that an argument might persuade a philosopher to believe in abstract propositions or sense data or snowdiscalls (yeah, the snowdiscall is seriously a thing of discussion among philosophers!), Russell had come to believe in God. But he didn’t thereby become religious.

And so, the conclusion: being a theist is insufficient for being religious. In the next article, I’ll explain how it also is not necessary.