I grew up watching Saturday morning cartoons, the highlight of which was always one and a half hours of  Looney Tunes: Bugs Bunny, Road Runner, Daffy Duck, Yosemite Sam, and the rest. Alas, Looney Tunes have not fared well in our age with many critics raising concerns about the violence of these zany cartoon shorts. And while it is easy to be dismissive of “political correctness”, it is eye-opening to consider just how violent some of those cartoons really are. In particular, the gun violence and gun suicides should make any parent uncomfortable.

Today, however, I found myself contemplating another disturbing expression of violence in Looney Tunes, in this case, the sexually aggressive stalking behavior of everybody’s favorite amorous skunk, Pepe Le Pew: 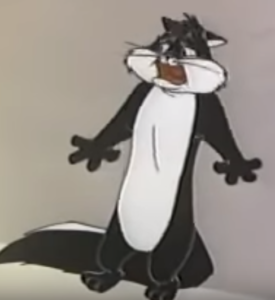 Pepe conforms to the familiar “stalking is love” trope in which the persistent would-be beau who refuses to take no for an answer is viewed favorably and is often rewarded for his persistence.

According to Julia Lipmann, the stalking tropes in romantic comedies can serve to normalize abusive and threatening behavior as part of romance. It isn’t a stretch to suppose that the attitudes which may bloom in one’s teens and twenties might be seeded in one’s childhood.

Look at the terror on the cat who is desperate to flee Pepe. Her face conveys abject horror. And yet, Pepe’s aggressive actions — the relentless pursuit and unwelcome groping/sexual assault — are played for laughs. This just isn’t funny.

Today, the Disney classic Song of the South is recognized as racist and has been rightly consigned to the cultural hinterland. Increasingly, Looney Tunes are facing a similar exile, first for the ubiquitous violence and gun violence, in particular. I would argue that the sexual violence and aggression of the Pepe cartoons has earned them a similar ignominious fate. While I used to roll my eyes at the critics of these old cartoons as the pc police, I now realize that the critics are right: Pepe Le Pew stinks.