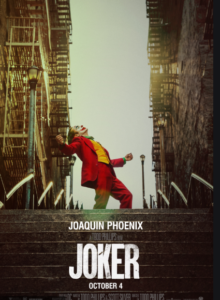 The new movie Joker has been polarizing among critics. Most seem to praise it as a masterpiece but some see it as irresponsible because it’s cinematic power is not properly channeled by a moral framework and could spill into society with a burst of incel violence.

That seems like a strange objection to me. I don’t think directors are obliged to select their stories or the way those stories are told based on the potential for various special interest groups to interpret and apply those stories in errant or antisocial ways.

If we applied such principles to cinema generally it would wreak havoc on the story-telling process. Another great example is Gus van Zant’s school shooting movie Elephant. The film portrays how a school shooting unfolds but it doesn’t take a moral stand against it. But who says that is the obligation of the director? Why can’t a story be ambiguous? Why can’t we trust audiences with the story? Who says the creator must bear the weight of how his/her art is received?

Bottom line: the moralizing is misguided; I plan to watch Joker.

The only question: will Phoenix dethrone Ledger?