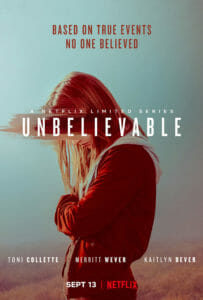 I’m not one of those people who is prone to binge-watch the latest big series on Netflix. But lo and behold, this past weekend my wife and I were mesmerized by the critically acclaimed new cop-investigation drama Unbelievable. The eight-episode show is based on an extraordinary and awful real-life case of a young woman who, after reporting a rape, was accused by the police of false reporting, and who was later vindicated due to the hard work of investigators in another state.

I first became aware of this terrible story when it was featured a few years ago on an episode of NPR’s This American Life. (You can listen to that episode here.) Unbelievable is powerful viewing with strong performances by Toni Collette and Merritt Wever as the lead investigators and Kaityn Dever as the young  survivor.

To its credit, Unbelievable places the spotlight on the survivors of sexual assault. While the show does not linger on disturbing images of rape and violence, it provides ample jarring flashbacks to convey the horror without becoming gratuitous. (On that point, it contrasts markedly with the notorious long-form rape scene in the 1988 film The Accused.)

In my opinion, one of the most powerful moments of the show comes in a comparison-contrast drawn between the first and final episodes. The first episode includes a relatively detailed and disturbing depiction of the “processing” of a rape victim in the hospital. It is painful to watch young Marie (Dever) being forced to undergo further indignities. Herein is a reminder of the continued need to humanize a system of medicine and justice which can all-too-often depersonalize and thereby hurt the very people it purports to help.

The final episode features a sequence that clearly is intended to compare and contrast with Marie’s experience, though now it is the rapist being processed into the prison system. At one point, he stands completely naked in the cell, and while this too is awkward viewing at best, the symbolism is powerful: this man’s wicked crimes are now laid bare for the world to see, there is no more hiding, and now he can taste a modicum of the horrific humiliation that he visited upon others.

As a Christian, one of the most noteworthy aspects of the show came with the powerful performance of Wever playing Detective Karen Duvall. You see, Duvall is portrayed as an evangelical Christian. But rather than ignoring any faith element or depicting Duvall with Hollywood’s go-to hypocritical and holier-than-thou stereotypes, the show portrays her as wise and compassionate.

Duvall’s faith comes up at several points in the series. There is a warm scene of the family singing in church together. And when another cop speaks harshly about God in this broken world, Duvall shares her own struggles with the problem of evil and suffering like a modern Job. In short, she isn’t put off by hard questions and angry protestations. Instead, she recognizes them for what they are: the fertile soil in which a genuine worldly-wise faith can grow.

One of the most intriguing scenes comes when Duvall and her de facto partner Rasmussen (Collette) visit a victim’s home and speak with the victim’s mother. She explains that her daughter is out for a (non-Christian) religious festival though she was raised Episcopalian. Duvall astutely realizes that the daughter has since joined the modern druidic movement and that her mother is responding defensively out of embarrassment. In a masterclass of disarming communication, Duvall speaks respectfully of the daughter’s current religious faith and politely asks the mother to let her daughter know they came by.

In another scene, Duvall and Rasmussen are talking candidly about how each manages to continue when they are forced to confront such violence and wickedness in the world. Rasmussen candidly states her admiration for Duvall’s faith while saying, tongue-in-cheek, that she primarily deals with all the stress by drinking alcohol. But even if the exchange is somewhat humorous, the deeper message remains. It is a dark world out there, but Duvall manages to navigate it with compassion, wisdom, and love.

All too often, the true-crime genre can become base and exploitive. Unbelievable breaks the mold with a riveting and redemptive drama that focuses on the toll created by sexual violence punctuated by the surprising light of goodness, integrity, and a young detective’s living Christian faith.