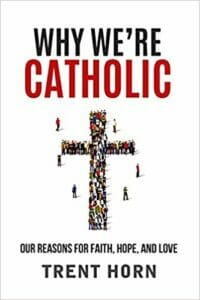 In his 2017 book Why We’re Catholic, Catholic apologist Trent Horn aims to provide a clear, concise, and winsome introduction to the Catholic faith. The book consists of twenty-five short and punchy chapters divided into five sections: truth and God, Jesus and the Bible, The Church and the Sacraments, Saints and Sinners, and Morality and Destiny.

I count Trent a friend and a joint laborer in the cause of Christian apologetics. And as I’ve said before, he is in the very top tier of young Christian apologists. At the same time, I am not a Catholic, so you can expect this review to identify some number of disagreements.

Let’s begin with the points of agreement. As I just said, Horn is a top tier apologist and that means he’s a top tier communicator, one who can dispense with errant arguments and misguided reasoning with a quick and memorable rejoinder. Consider, for example, the tired attempt to marginalize Christian belief with the statement “You’re only a Christian because you were born in a Christian country” (or whatever). Horn retorts,

Horn argues ably for the existence of a creator with brief statements of the kalam cosmological and design arguments for God’s existence. That leads to another common objection: if God created the universe, then what created God? Horn replies that that question is akin to asking, “If the locomotive is pulling the train, then what is pulling the locomotive?” (27) With that simple analogy, he effectively communicates the concept of a necessary concept to the layperson without any need to introduce modal distinctions between contingency, possibility, and necessity. Once again, that’s evidence of an excellent communicator.

Overall, I appreciated Horn’s treatment of the problem of evil which culminates in an account of the heroic witness of Maximilian Kolbe (36-7). However, when Horn condemns genocide and slavery as social evils (35) he invites the skeptic’s question: if genocide and slavery are evil then why did God approve of them in ancient Israel (e.g. Deuteronomy 20:10-20)?

Occasionally, Horn makes statements that I find a little too talismanic for my taste. For example, he opines that the name “Jesus Christ” elicits “tension and discomfort” in people not because of social conditioning but “because the name itself has power.” (46) Would the equivalents Jisu (Fijian) Ieso (Georgian), Yexus (Hmong Daw), or Ecyc (Mongolian) have the same power for an English speaker? If not, is that not evidence that the power perceived is due to social conditioning?

Horn offers an effective defense of the resurrection. I was less persuaded by his defense of the Trinity as in the sleight of hand in this quote: “if the son of a dog is a dog, and the son of man is a man, then the Son of God must be God.” (63) (Ahem, note the omission of the indefinite article.) Horn also has a tendency to retroject later theology into earlier periods as when he suggests that Tertullian was an orthodox trinitarian (65). (He wasn’t.)

As you can imagine, I am less sanguine when it comes to Horn’s critique of Protestants. For example, he supposes that the Reformation principle of Sola Scriptura entails that the Bible teaches all doctrine (75). That’s not correct. After all, in his famous declaration at the Council of Worms, Martin Luther himself invokes “Scripture and plain reason” as well as “conscience” in his stand against the errors of the Catholic Church. Sola Scriptura is about the primacy of Scripture in doctrinal construction and evaluation, not the misbegotten notion that Scripture is the sole source of doctrine.

Next, Horn offers defenses of the Pope, priests, and Mass. Interestingly, he takes on the cannibalism charge by noting, “Since Jesus did not want us to be cannibals, he gave us his body and blood to consume under the miraculous form of bread and wine.” (112) However, that is a spurious argument: the consumption of flesh is cannibalistic not because it appears to have the appearance and texture of human flesh but rather because it is human flesh. Thus, if the bread and wine truly are transubstantiated into the body and blood of Christ at consecration, then the consumption of those elements is, by definition, cannibalistic despite the fact that the accidents (i.e. the sensory qualities) remain unchanged.

I was most disappointed by chapter 16, “Why We Believe in Spite of Scandal.” To be sure, Horn makes legitimate points, such as noting that sex abuse is a problem in other churches. But overall, there was a defensiveness in this chapter that does not begin to take the horror of Catholic sexual abuse seriously. For example, Horn writes:

“According to the John Jay College of Criminal Justice, about 4 percent of priests who served between 1950 and 2002 have been accused of sexual abuse (note that accusations do not always mean a crime was committed).” (130)

Now let’s pause here for a moment. The gist of this statement, so it would seem, is that 4 percent is not that high, and moreover that it may be lower because “accusations do not always mean a crime was committed.”

Perhaps it is just me, but I find the fact that 4 percent of priests have been accused of raping and molesting children to be shockingly high. That amounts to thousands upon thousands of priests — representatives of Christ — who have targeted vulnerable children by molestation and rape.

What about Horn’s suggestion of possibly false accusations? While that is technically true, of course, the fact remains that sexual abuse crimes against children are severely under-reported. Thus, the likelihood is that the actual percentage of priests who have molested and raped children is significantly higher than 4 percent. That is simply stunning.

But these are not just statistics: they are individual lives. To get a sense of the horror, I would commend to you the Grand Jury Report chronicling the victimization of more than one thousand children in Pennsylvania.

At one point, Horn recalls an exchange he had with a woman who asked: “How can Catholics have the true Church when their priests do such awful things?” (134) Horn replied by asking her, “does the devil hate Christ’s Church?” She replied, “Absolutely!” Then Horn asked,

“Then of all the members of the Church, who is he going to attack the most?”

It would seem that Horn is attempting to ameliorate the scourage of the clerical sexual abuse of children by attributing at least some degree of it to demonic attack. Sorry, but that’s a bit too close to the devil made me do it defense for my liking.

You might think I’m being too hard on Horn. But I think there are times where apologetics must begin in sackcloth and ashes, and this is one of those times.

Having expressed some deep disagreements with Horn, I’m happy to end with some agreement. I agree that “Salvation does not consist of a single moment when we accept Christ.” (140) Salvation is a process as much as it is an event and Protestants increasingly appreciate this fact. (Consider, for example, the New Perspectives on Paul and how they have upended the more punctiliar Lutheran readings of Paul.)

While I don’t agree with Horn that Paul is referring to purgatory in 1 Corinthians 3:13-15, I am happy to agree with Protestant philosopher Jerry Walls that purgatory is fully consistent with Protestantism. Protestants can also learn from Horn’s treatment of prayer to saints (it’s no different, in principle, then me asking you for prayer) and the veneration of Mary (given the profound reality of incarnation, a healthy Christology requires a healthy Mariology).

Protestants can also benefit from Horn’s treatment of issues in ethics (abortion, in particular) and his brief chapters on heaven and hell. (I will restrain myself from taking issue with some of the details here given that my review is already long-in-the-tooth.)

While I clearly have some dissatisfactions with Why We’re Catholic, overall this is an excellent and accessible introduction to apologetics generally and Catholic apologetics in particular. The book is complemented by several sidebars and concluding bullet points for every chapter.

My thanks to Trent Horn for a complimentary copy of Why We’re Catholic.

You can order your own copy of the book here.