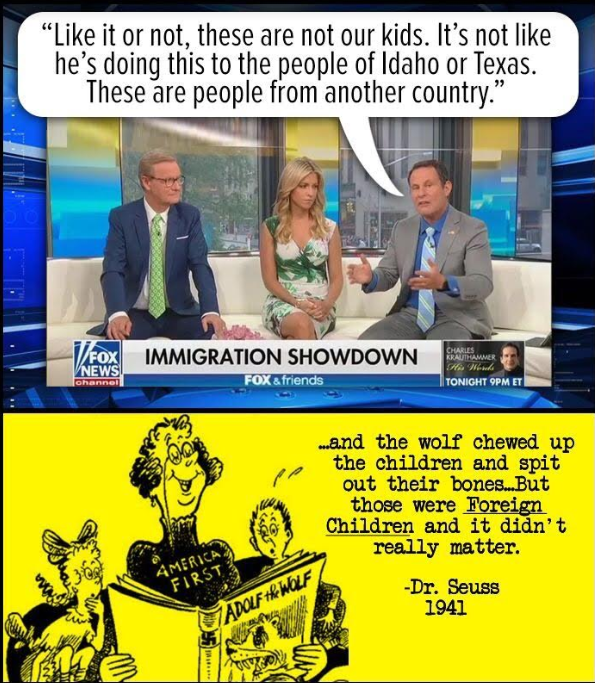 My friend sent me this meme offering a crazy juxtaposition. Before I tweeted it, I wanted to confirm that I was not being a purveyor of fake news. Did Brian Kilmeade of Fox and Friends really say that? And is that a real Dr. Seuss cartoon?

Here is what I found. First off, yes, Kilmeade said that in June 2018. You can read more at The Hill. However, the meme elides one important caveat in which Kilmeade references showing compassion even for non-American kids (gee, how good of you). Here are his words:

“Like it or not, these are not our kids. Show them compassion, but it’s not like he’s doing this to the people of Idaho or Texas. These are people from another country.”

As for the Seuss cartoon, yes, Dr. Seuss did draw anti-fascist America-first cartoons including the one featured in the meme. You can read more at Snopes.

So the meme is mostly right, save that unfortunate elision of Kilmeade’s compassion caveat. Still, disturbing enough, right? Kilmeade’s language is profoundly otherizing. Kids are kids, no matter their nationality. And that includes the 23-month old daughter of Oscar Alberto Martínez who drowned with her father in the Rio Grande on Sunday. By now, you’ve probably seen the photos of father and daughter, face down dead on the banks of the river, so I won’t reproduce it here. Instead, I’ll conclude with an excerpt from The Killers’ new song “Land of the Free”:

Down at the border, they’re gonna put up a wall
Concrete and rebar steel beams
High enough to keep all those filthy hands off of our hopes and our dreams
People who just want the same things we do
In the land of the free