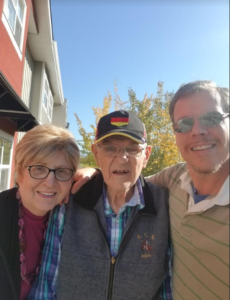 This article consists of a series of tweets which tell the story of my experience of my father’s Alzheimer’s Disease from right before his diagnosis in December 2017 to his death on April 3, 2019 and the hope of the resurrection that remains.

Interesting, after I added up all the tweets, I realized I had 46 of them. And that’s a significant number to me given that I am now 46, so you might say that even if these tweets cover a mere span of 17 months, they are also a tribute born out of an entire life.

November 29, 2017: My dad’s been driving since 1952. He always loved taking to the open road. Yesterday the doctor said he can’t drive anymore. Tomorrow we begin to adjust to the new reality. But for now, we grieve another loss.

December 19, 2017: Today my dad was diagnosed with Alzheimer’s Disease. Some helpful things for the journey ahead:

March 2, 2018: Alzheimer’s is one, long, crappy slog. Yesterday, my dad thought that Rachel Maddow was talking about him. That level of delusion is a new phenomenon. And it gets worse from here on out

March 12, 2018: Just concluded a 3-day visit with my parents. As I left, my dad pointed out a piece of lint on the floor and said accusingly, “That wasn’t here before you arrived.” Dementia has a way of narrowing one’s horizons. And yet, there’s an undeniable comic element to the “accusation”.

March 27, 2018: My dad’s dementia is progressing slowly but surely. Yesterday, he told my mom, “I think it’s time you all forget about me.”

April 16, 2018: Today I called my parents and my dad (who has dementia) answered the phone. “Oh, Randy! I thought you’d passed away,” he said. Alas, he sounded more surprised than happy to hear I was still among the living.

April 23, 2018: A quick update on my dad’s dementia: I learned last week that in the evening he is starting to forget that he has two sons. As we fade into the fog of forgotten memories, this seems like a good time to tweet my review of “Still Alice”.

May 12, 2018:  Each day my dad sinks further into the oblivion of dementia. Alzheimer’s is an especially cruel mistress. But I am filled with thanks for every day, not least because I recognize I already have enjoyed familial blessings that others have been denied.

May 24, 2018: This morning my dad was diagnosed with pneumonia, a further complement to his recent precipitous cognitive decline due to Alzheimer’s. I used to have little time for the phrase “It is what it is.” But these days I find myself oft embracing this stoic wisdom. Such as it is…

May 27, 2018: I’m back in my hometown Kelowna to see my dad in the hospital. Before the visit this morning I climbed Knox Mountain. First song on the way down: “Jump” by Van Halen. Great way to start the day!

May 27, 2018: My dad’s Alzheimer’s puts a new spin on this T.S. Eliot quote: “The end of all our exploring will be to arrive where we started and know the place for the first time.”

May 28, 2018: Today while visiting my dad in the hospital he asked why God doesn’t make a process of dying that can unfold over 15 years instead take 15 minutes. Fair question.

May 30, 2018: After spending a week visiting my dad in the hospital, I think even more highly of nurses and the work they do. I have already marked National Nurses Day (May 6) on my 2019 calendar. I won’t miss that day again!

June 4, 2018: My dad continues to descend into the fog of Alzheimer’s. The other day when I was visiting him in the hospital, he was worried about having the right papers to cross the border into Germany c. 1940. Mind and memory are extraordinary, their dissolution tragic.

August 4, 2018: The other day my older brother visited my dad (who has Alzheimer’s) at the care home. “Do you know who I am?” he asked. “Of course,” my dad replied with a twinkle. “My oldest brother!” Eh, close enough!

August 27, 2018: I just received an email from one of my (atheist) blog readers expressing condolences for my dad’s Alzheimer’s diagnosis. He wrote in part, “Here’s a place where atheism is lacking, because I can’t say that you’ll be in my prayers. But … you will be in my thoughts.” Amen!

September 17, 2018: One example of the cruelty of Alzheimer’s: nobody is happy with my dad’s recovery from pneumonia, for the strengthening body is paired with the deteriorating mind.

October 8, 2018: Going to visit my dad next week. His Alzheimer’s has now progressed to the point where he can’t remember my name, though he sometimes gets it after a few hints. Last night, I dreamt that his mind returned. Alas, it was but a dream.

October 10, 2018: A couple of days ago, my dad bopped a woman on the head at the care home where he now resides. What do you do as Alzheimer’s turns a self-possessed adult into a petulant toddler?

October 16, 2018: Here I am back home in Kelowna visiting my mom & dad. Dad now lives in a care home where he receives special care for his dementia. On the first day, he called me “Hugo” (his brother), but he used my name after that. In fleeting moments, things even seem normal.

October 16, 2018: I’m visiting my dad in the dementia ward today. There’s no good way to depart this world; only more-or-less bad ways.

October 19, 2018: Just got back from my family visit in my hometown of Kelowna, including time hanging out with my dad at his new care home. Along the way, I spent some time watching the sunset at Gyro Beach.

October 29, 2018: Ugh, my dad attempted to choke another resident in the care home today, so now he’s being transferred to a higher security facility. Such is the long and winding road of Alzheimer’s.

November 29, 2018: The best Beatles song to describe my dad’s Alzheimer’s? Hmm, I’m going with “The Long and Winding Road.”

December 14, 2018: Back in my hometown visiting family. Today, we went to visit my dad at the care home (he has Alzheimer’s). It was a good visit, except that he tried to eat his napkin with lunch. The slow spiral to oblivion continues.

December 16, 2018: People often ask me how my dad is doing. Once a person has been diagnosed with Alzheimer’s, there is only one answer: “Worse than before.”

December 16, 2018: Since my dad was diagnosed with Alzheimer’s last year, I find that I am carefully noting every one of my memory lapses with the sober prospect of what may lie in my future.

February 1, 2019: My wife & daughter are visiting my mom. Yesterday, they drove out to see my dad at the dementia ward. Like a little kid, he was excited to show them his room and how he could climb into bed all by himself. Alzheimer’s occasions moments both sweet and bitter, noble and tragic.

March 4, 2019: Today, my mom will celebrate her 52 wedding anniversary by visiting my dad in the dementia ward.

March 27, 2019: I flew home to visit my dad in the dementia ward last week. They are starting him on palliative care and he’s becoming non-responsive so this will likely be the last visit. When he suddenly reached out to grab my face, of course, I needed to snap a selfie. 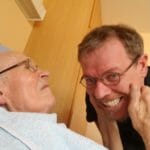 March 28, 2019: My father is in rapid decline with Alzheimer’s. Here’s my account of The Last Visit with Dad

April 3, 2019: Christian Post published my article on my dad’s impending death due to Alzheimer’s. The article got a comment from someone peddling herbal supplements to “cure” the disease. Exploiting the pain and misbegotten hope of the suffering? Wow, that’s cold.

April 3, 2019: My dad’s now on morphine and no longer eating. Estimates are that he has days to live, so I need to start writing a eulogy. How does one summarize the life and impact of a parent in 10 minutes? A daunting task, indeed.

April 3, 2019: Well, my dad passed away a few minutes ago. This would be a good time to quote the dedication to my book “What on Earth Do We Know About Heaven?”: “For my dad, who taught me to live life in the light of eternity.”

April 4, 2019: Yesterday morning, my father passed away from Alzheimer’s. In the afternoon, I spoke at Fort Saskatchewan Christian School. The young people asked questions about many great topics, including heaven. I was delighted to talk about the general resurrection while thinking of Dad.

April 6, 2019: I just finished the eulogy/sermonette for my dad’s memorial service next weekend. It clocks in at 13 minutes and 30 seconds. It’s good to have that done. 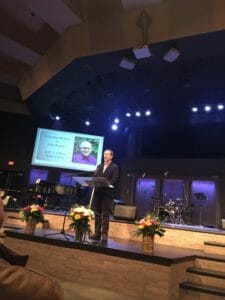 April 13, 2019: Just arrived at a coffee shop. A barista greets me with “How’s it going?” I could reply, “Well, I’m speaking at my dad’s memorial service in a couple of hours, so there’s that.” Instead, I reply, “Fine, I’ll have a dark roast…” Life goes on, right?

April 13, 2019: Just came from my dad’s memorial service back to the same coffee shop I was in this morning. The barista looked at us, puzzled, and observed, “Hey, you were here this morning!” I nodded and ordered a gusto dark roast. Rest in peace, dad, this coffee’s for you.

April 13, 2019: Today, we celebrated the life of my late father. The day ended with a walk in a city park as the cool spring rain began to fall. As we ambled down the darkening trail, the street lamp offered a warming glow against the ominous storm clouds overhead.

April 18, 2019: My dad died on April 3. The first time I cried was right before his official Alzheimer’s diagnosis in December 2017. The second time was two days ago when I was out for a motorbike ride. Suddenly, I had trouble seeing the road as tears welled up. Dang, grief is unpredictable.