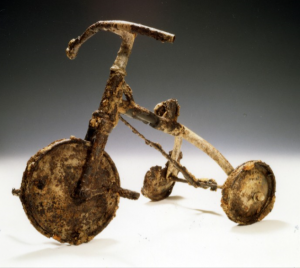 A tricycle after the atomic bomb was dropped on Hiroshima.

If you want a simple and effective way to identify a Christian apologist worth listening to, ask them to share their thoughts on the problem of evil. If they keep their discussion of the problem in the abstract and if they suggest that it is a problem easily solved, you should keep looking. But if they instead take the time to describe the agonizing depth and breadth of the problem, and if they recognize that the problem is such that some people reasonably find their way to non-belief, then that is likely an apologist worth heeding in other matters.

This past week, I taught a one-week seminary course in apologetics. Not surprisingly, we devoted several hours of class time digging into the problem of evil, beginning with the moral problem and then turning to the natural problem. Before we began to look for answers, I pointed out to the students the importance of having a solid grasp of the problem. And that requires us to set aside a temptation to frame the problem abstractly as if the issue were merely how to explain the presence of “metaphysical disvalue or disorder”.

On the contrary, as I pointed out with two emotionally wrenching cases, evil always comes to us in heart-wrenching, concrete events. Evil is the problem of a young boy that was hanged on the gallows in a Nazi concentration camp while other prisoners were forced to watch. Evil is the problem of a four-year-old girl who finally succumbs to the cancer that has ravaged her body while her parents weep bedside. That is what we must explain. That is what we must reconcile with the existence of an all-powerful and all-good God.

And that is what it looks like to steelman the problem of evil and suffering in the world. You cannot begin to offer a meaningful solution to the problem until you have grappled with the agonizing depth of the problem. And unless an apologist is willing to face the challenge on this, the most daunting of questions, you have reason to doubt that they will do so elsewhere.