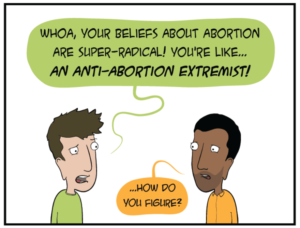 This cartoon is one panel in a series from Adam4d.com. Read the entire series here: https://adam4d.com/anti-abortion-extremist/

CNN just posted an article titled “Before judging ‘late-term abortion,’ understand what it means, doctors say.” I agree with the sentiment. There is way too much heat and not enough light in this complex and highly emotional debate.

That said, I cannot help but reply to the comment of one of the two doctors interviewed for the article. In response to the term “late-term abortion,” Dr. Jennifer Conti observes,

“In obstetrics, we don’t divide pregnancies into terms. ‘Late term’ is an invention of anti-abortion extremists to confuse, mislead and increase stigma. The appropriate language is ‘abortions later in pregnancy.'”

Ah, I see, kind of like how the term “anti-abortion extremists” is an invention of pro-choice supporters “to confuse, mislead and increase stigma”!