With over 700 hymns to his credit, including classics like “When I survey the Wondrous Cross,” Isaac Watts is rightly considered one of the great hymn writers of Christian history. Another one of his most well known and best-loved hymns is “Jesus Shall Reign Where’er the Sun”. While I grew up hearing this hymn, I never picked up on the uncomfortable colonial context: 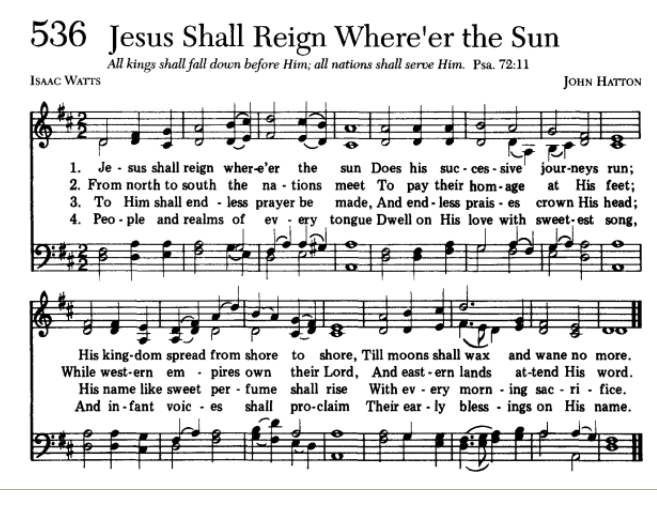 The practice of referring to a great empire as one on which the sun never sets has been around for centuries. But in 1829, Scottish writer John Wilson applied it to the British Empire: “His Majesty’s dominions, on which the sun never sets…” Some years earlier, in 1773, George Macartney had made a similar observation: “this vast empire on which the sun never sets, and whose bounds nature has not yet ascertained.” While the hymn predates these statements (Watts died in 1748), it nonetheless is written against the backdrop of robust British colonial expansion and an easy (and ultimately disastrous) conflation of Colonialism with God’s kingdom. Thus, in the minds of countless choirs and congregants, these verses would be sung with the mental image of the Flag of Great Britain snapping in the wind across the globe.

Bad as that is, today, I learned that it’s significantly worse. Verse 2 has changed, it would seem. While I haven’t researched this, it’s a safe text-critical assumption that “eastern lands” represents an edit of what is presumably the original reading: “savage tribes”. 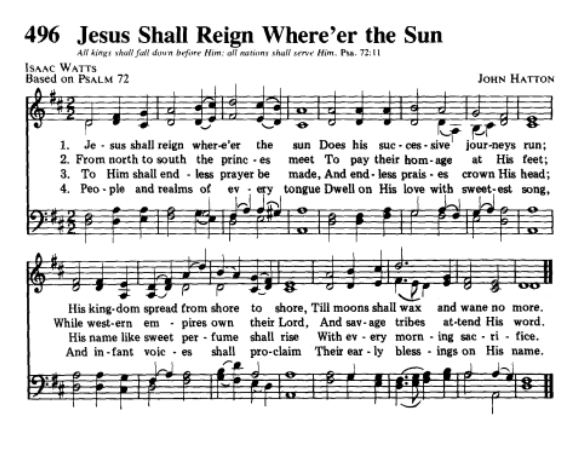 I suppose I shouldn’t be surprised: Europeans were staggeringly racist moving into the twentieth century. Think, for example, of Kipling’s notorious “White Man’s Burden.” Nonetheless, it is sobering, indeed, to see such baldly racist opinion in a beloved hymn. It also makes one wonder how the songs of today will be viewed in the future. In short, what are our glaring blindspots?