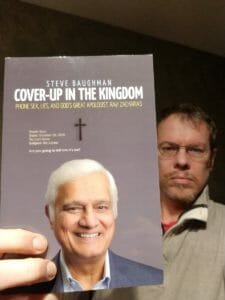 The other day I spoke with a supporter of Ravi Zacharias International Ministries. To his credit, he had read Steve Baughman’s book at my recommendation. So I asked him what he thought. He replied, “I don’t know. It’s troubling.” In other words, he had gone from thinking that Zacharias is a fine apologist and a Christian man of integrity to thinking that Zacharias is very plausibly a fabulist, liar, and predator.

I commend that RZIM supporter for keeping an open mind and looking at the evidence. However, I still pressed him on the implication that he could “sit on the fence” regarding the fitness of Mr. Zacharias for ministry. Here’s how I put the point: If you thought that a daycare worker was very plausibly a sex offender, would you send your child to that daycare? No, of course not. There is no sitting on the fence and you don’t take that risk.

If there is sufficient evidence to support the plausibility to the charges of Mr. Zacharias’ chronic fabulism and lying as well as his predatory behavior, how can you possibly sit on the fence? You cannot. Unless and until Steve Baughman’s charges are definitively refuted, and they most certainly are not, no Christian in good conscience should support Mr. Zacharias and RZIM.

If you haven’t yet considered the evidence against Mr. Zacharias, you can get Baughman’s book here.