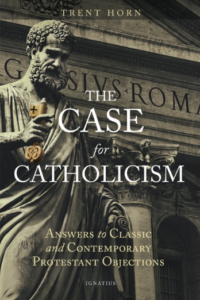 Trent Horn is one of my favorite Catholic apologists.

And now you should also read our conversation. Here’s part 1 where we have a conversation about the Magisterium (teaching authority) of the Catholic Church and whether such an authority is necessary to make sense of the great diversity in Christian expression.

So here’s my question: in the midst of all that bewildering diversity, what is your case for Roman Catholicism as the fullest or most correct expression of Christianity?

TH: Thanks for having me Randal!

First, this citation from the World Christian Encyclopedia is misleading (even though many Catholics are fond of citing it). For example it counts the same religious group existing in different countries as belonging to different denominations and even cites liturgical rites within the Catholic Church as being completely different denominations, which is false. However, even if there were only hundreds of different denominations they still differ among each other on extremely important areas of theology (like soteriology and the nature of the sacraments) as well as morality (like the permissibility of abortion and homosexual behavior). Given their mutually exclusive claims we should ask, “Upon what authority do these different denominations claim to possess the fullest expression of the Christian faith?”

The Bible does not teach that scripture is our sole, ultimate authority for theological matters and the first Christians did not treat scripture in this way. In fact, belief in the infallibility of the canon of scripture must be grounded in an authority outside of scripture or else the argument for the inspiration of scripture becomes circular and invalid. Instead, the Bible and early Church fathers confirm that Jesus established a single Church with a sacred hierarchy composed of priests and bishops who were responsible for administering sacraments like the Eucharist and Reconciliation (a.k.a confession).

The purpose of these sacraments is to transmit sanctifying grace and infuse Christ’s righteousness into a person’s soul and, as a result, make that person an adopted child of God within God’s new covenant family that is found the one universal or “catholic” Church (Catholic, of course, meaning “according to the whole”). The authority to teach and lead this Church was first given to the Apostles who then handed this authority on to successors that exists today as the bishops of the Catholic Church.

The Catechism of the Catholic Church teaches that, “Those who believe in Christ and have been properly baptized are put in a certain, although imperfect, communion with the Catholic Church” (838). As a Catholic I desire that all Christians become one just as Jesus and the Father are one and can experience a perfect communion with the Church Jesus Christ established. Obviously, there is much more I could say and for a lengthier presentation I’d refer readers to my book The Case for Catholicism: Answers to Classic and Contemporary Protestant Objections. But for now I’m happy to discuss any points or issues that stand out to you.

RR: Excellent, that’s very helpful. I’d like to begin with the way you characterize the disagreement:

“Given their mutually exclusive claims we should ask, ‘Upon what authority do these different denominations claim to possess the fullest expression of the Christian faith?’”

I agree that there are inescapable disagreements between various denominations. For example, Catholics baptize infants, whereas Baptists do not; Catholicism embraces an episcopal polity while Baptists embrace a congregational polity.

Of course, that relativist interpretation couldn’t explain all difference, but it could explain much of it. However, in doing so it would also marginalize the claims of any single denomination — including the Roman Catholic Church — as being the one true church. So how would you rebut that relativist interpretation of the deep divergence in belief and practice among different denominations?

TH: I agree that the correctness of some religious beliefs and practices are relative to the religious community that celebrates them. For example, in the Eastern rites of the Catholic Church the standard age to administer the sacrament of confirmation and first Eucharist is shortly after infant baptism. But in the Western rites of the Church (like the Latin rite with which most people are familiar) those sacraments are normally received when a child reaches the age of reason (around seven years of age). However, there are differences between religious groups that cannot be explained as simply being, “true for them, but not for me.”

It doesn’t make sense to say, for example, that “God exists for Christians but he doesn’t exist for atheists” or “Jesus is God for Christians but he isn’t God for Muslims.” There either is a God or there isn’t and Jesus either is God or he isn’t. Similar questions arise when it comes to important differences among Christians. For example, salvation either can be lost or it can’t and hell either is eternal, conscious suffering or it isn’t. Our beliefs about these things do not change their objective nature. This also means some denominations must have the correct, objective answers to these questions because the questions exhaust all possibilities.

Granted, the examples you cited like church polity or celebrating baptism seem more related to orthopraxy than fundamental elements of orthodoxy, but even in these cases important doctrinal questions arise that have objective answers. When it comes to celebrating baptism we might ask: “Is baptism necessary for salvation? Does the act of baptism spiritually regenerate a person and make him capable of receiving eternal life?” If the answer to both questions is, “yes” then the practice of infant baptism would logically follow.

In response, a critic might say, “Well, maybe baptism spiritually regenerates Catholic babies but it doesn’t do that to Baptist babies” or “Maybe the Pope is infallible for Catholics but not for Protestants.” This brings me to the fatal flaw in the relativist’s rebuttal: How do you know which denominational differences are relative and which are absolute? Which differences represent a valid “diversity of opinion” and which result in one denomination being in (possibly serious) theological error while the other denomination has a truer theology?

That’s why I am glad the Catholic Church has a magisterium, or teaching office, that has received authority from the Apostles and ultimately Christ himself that allows it to faithfully guide believers. One way it does this is by setting “boundaries for belief and practice” that determine what is fundamental and unchangeable, what is true but capable of being refined in the future, and what is acceptable to believe or practice but not obligatory or binding upon all.

RR: You say that the attempt to relativize a subset of doctrinal disagreements has a fatal flaw as regards the challenge of identifying which doctrines can be properly relativized. You then suggest that the way to neutralize that flaw is by appealing to an authoritative magisterium which can guide us in discerning which doctrines are proper candidates of relativization.

But here’s the problem: prior to appealing to Catholic magisterial authority, you offered preliminary reasoned arguments as to which doctrines can be properly relativized. For example, you argued that one cannot relativize the means of salvation or the nature of posthumous punishment: “hell either is eternal, conscious suffering or it isn’t.” Notably, none of those arguments appeals to the Magisterium of the church. On the contrary, they stand independent of it and thus can be evaluated on their own merits whether or not one accepts the Catholic Magisterium.

So it seems to me that your own analysis actually undermines your claim that the challenge of discernment constitutes a fatal flaw which requires appeal to a magisterial authority.

TH: I agree that we can know from reason alone that certain doctrines refer to objective statements that are either true or false for all people (like statements about the existence of God or divinity of Christ). Indeed, we can know from reason that any statement about reality is either true or false and any Christian practice is either permissible, forbidden, or obligatory. The problem still arises, however, as to knowing which doctrines and practices are binding only upon a certain community, only upon believers, or are binding upon all people.

I was replying to the simplistic idea that we need not concern ourselves with doctrinal differences since they can just be true only for those who believe in them. You seem to agree with me that this is not a tenable solution for all doctrines, but only for some of them. But then which sub-set do they apply? Are Unitarianism, monothelitisim, open theism, and the moral permissibility of homosexual behavior areas where believers can reasonably disagree or matters that are non-negotiable?

You could say in response, “Well, let each person examine the sources for belief and come to his own conclusion on those questions” and in one sense, everyone has to do that. For example, I don’t believe in the authority of the Church’s magisterium solely because it is useful in settling these disputes or because it says it is required in doing so (the former being crude pragmatism and the latter being invalid circular reasoning).

My analysis of the biblical and historical evidence, however, has led me to conclude that Christ did not make Scripture the sole source of necessary Christian doctrine to be judged by each believer’s personal interpretation of it. Instead, Christ established an enduring, hierarchical Church that would retain his authority over time and that this Church’s teachings forms the most coherent understanding of the truths we have received from divine revelation.

RR: Just to be clear, I certainly don’t think that Scripture constitutes “the sole source of necessary Christian doctrine”, not least because that doctrine itself is not to be found in Scripture. (Nor is that what the Protestant Reformers meant by “Sola Scriptura.”) We theologize our reading of Scripture through our experience, shaped by our traditions, and guided by our rational, moral, and aesthetic intuitions. The challenge, then, is to reason all these streams together into a coherent framework of belief. My only point here is to deny the claim that appeal to a magisterium is necessary for this process to work.