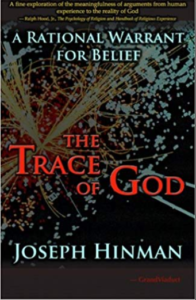 Is it possible to encounter God through mystical experience? And if so, is it possible that this experience could provide the rational basis for belief in, and even knowledge of, God? Joseph Hinman has studied this topic extensively and his answer to both questions is yes.

Mr. Hinman has an MTS from the Perkins School of Theology at Southern Methodist University and has studied at the doctoral level at the University of Texas at Dallas. He has published in the peer-reviewed academic journal Negations: an interdisciplinary journal of social criticism. In his 2015 book The Trace of God: A Rational Warrant for Belief, he makes his case in defense of the rationality of theism based on mystical experience.

I recently had a conversation with Mr. Hinman about mystical experience and the argument of his book. Here is that conversation.

RR: Joe, thanks for joining me for this discussion on your book The Trace of God. Let’s start off with basics. What do you mean when you refer to a trace of God?

JH: To put it in simple terms I was drawing an analogy between the feeling of God’s presence in religious experience and following footprints in the snow. Religious experience is analogous to the footprint of God. I used the term “trace” because the concept of following tracks in the snow reminded me of Derrida’s concept of the trace, which he uses in Writing and Difference and Of Grammatology. I studied Derrida for about four years in my doctoral work. The details of Derrida’s idea of the trace are not important here: the takeaway is the image of tracking footprints in the snow.

RR: Okay, so how does that work, exactly?

JH: What is important is a more complex analogy I draw between the Derridan Trace and Schleiermacher’s concept of the “co-determinate.” The  “co-determinate.” is like the notion of a fingerprint or a footprint: it’s the signature that is imprinted by the presence and is always left by the presence of someone or something thing, like a fingerprint. In this case it refers to religious experience. God is leaving his footprint on the life of the believer through  the affects (and effects) of religious experience, particularity that known as “mystical experience.” or “Peak experience.”

RR: What kind of experiences are you talking about?

RR: Atheists will predictably claim that specific religious experiences can be explained more simply without invoking the notion of God. To take a simple example, I might say that when I pray I sense God’s peace and love. This experience, so the atheist would say, can simply be explained by the psychological calming impact of prayer which may be no different from an atheist engaging in the practice of meditation. To put it simply, Ockham’s razor slices off the supernatural dimension.

So what kind of experiences are you thinking of which are best explained by invoking the concept of God?

JH: I focus upon what is commonly called “mystical experience” because that particular phenomenon has a huge body of scientific work behind it. Contrary to popular belief Mystical experience is not about seeing visions and hearing voices. Great mystics may have done these things but they are not indicative of mystical experience. There are two major aspects involved in this experience: “the sense of the numinous” and “Undifferentiated unity,” The former is a sense of all pervasive love, a presence of love which many describe as the presence of a person often taken to be God’s presence; the latter is the sense that all things are connected and that differences are illusory.

There is a huge body of scientific study that has been done on this over the last 50 years, starting with Abraham Maslow. This body of work is well known in psychology of religion but is virtually unknown in theology or apologetic. The studies show that religious experiences help you in life, those who have theses experiences tend to score higher on self actualization tests. Studies show that such people are better able to cope with chronic pain, and other such pathological conditions.

These are very misunderstood experiences, They are often written off as the product of mental instability or delusion. Studies show there is no connection between mental illness and mystical experiences, Those who have such experiences more often tend to be more mentally stable, and they have a therapeutic effect that enables those who do have mental problems to recover faster. In my book, The Trace of God,  I go into the methodology of these studies in great detail.

RR: Excellent, that’s very helpful. Perhaps we could treat each of these two points in turn, beginning with undifferentiated unity. As you put it, that is the sense that “all things are connected and that differences are illusory.” Here’s my problem: that experience would be consistent with the Advaita Vedanta Hindu school of philosophy. But how does it support western forms of monotheism such as we find in Christian theology?

JH: I have a section in The Trace of God where I discuss Vedanta and the problem of mystical experience in non Christian faiths. Such experience is universal to all religious traditions. The Hindu philosopher  Aurobindo was converted to Vedanta as a result of his mystical experience. In fact atheists have them too. These experiences are not salvation, They are perceptions of God’s presence, mystics are free to interpret that as they will, and most of them seek to filter their experiences through the constructs of their own tradition in order to explain their experiences,

The God arguments I made from the data, like most God arguments, are not specific to a tradition. I think the undifferentiated unity is expanded in Christian terms by understanding God’s omnipresence, it is the unity of the life-world of which Schleiermacher wrote. God gives all people the ability to perceive his presence and his everywhere and in all things so we perceive that, but we are free to explain it in any number of ways. In fact universal nature of the experience is the basis for one of the God arguments, there is no basis for a religious gene so the universal nature of God’s presence is an indication that people really are experiencing an objective reality apart from themselves.

RR: Okay, let’s talk a bit about the sense of the numinous. You refer to this experience as an “all pervasive love”. However, when Rudolf Otto discussed the topic in his famous book The Idea of the Holy, he identified two components to this mystery: mysterium tremendum et fascinans. In other words, that mysterious reality is an experience that both attracts as something transcendent and wonderful (fascinans) even as it repels as something terrifying and unknown (tremendum). Would you agree with that analysis? Or do you only analyze the experience in terms of this all-pervasive love?

JH: Yes of course, God is not Santa Claus, he can get pretty serious about things. I felt like that aspect of it requires other things to be in place first before it’s explained. Anything that is immense and transcends the scope of our understanding, the sublime, has that dual aspect, wonderful and terrible. I think when we approach God sincerely and contritely and seek to know go that terrible aspect moves into the background and the loving presence moves into the foreground.

RR: Fair enough. So we can agree that many people have experiences of a numinous reality and/or a sense of undifferentiated unity. And this brings us to the nub of the issue. Why think that these experiences are best explained by positing the existence of God? After all, many atheists and naturalists describe having transcendent, quasi-spiritual experiences when they encounter the universe: Carl Sagan’s Gifford Lectures, published as The Varieties of Scientific Experience, is a great example. Sagan would interpret these spiritual feelings as natural human responses when our own finitude encounters various aspects of nature, such as the unimaginable, majestic scale of the universe.

Why isn’t Sagan right? What requires us to posit God to explain these experiences?

JH: When atheists speak of mystical experiences and say they did not detect God (usually meaning a big man on a throne with magic powers) they are doing the same thing all other mystics do, they are filtering their experiences through an ideological framework that seeks to explain the experience. The studies show the experiences themselves are the same, it’s the explanatory frameworks that differ. When researchers take out the specific references to the various traditions the mystics are all describing the same things.For some, the wonder of nature is a trigger for the experiences but it’s not the only trigger (it has triggered Christian experiences too). For others, it’s classical music, or even theology. They are all having the same experience that leads one to think there is an objective reality out there that is really being experienced. Religious belief is culturally constructed, not a genetic endowment. I discuss these arguments in depth in The Trace of God.

Because it’s not genetic there is no reason why they should be having the same experience. The experiences should not be universal, yet they are. That indicates that there is an independent reality external to the human mind, That is one independent argument for the existence of God based upon the mystical experience research data. A second independent argument is the fact that the vast majority of people who have the experience find that it is about God a priori. They recognize it as a religious experience. That is apart from the need to explicate it by one’s own religious tradition. We know this because it is sometimes a source of conversion; it is also sometimes contrary to one’s own doctrine. Some switched their doctrinal understanding because of the experience, such as Aurobindo, mentioned above.

The third God argument I deal with in the book is called the “Argument from epistemic judgement” (aka “The Thomas Reid argument”).  I constructed my own criteria of epistemic judgement by which I feel we habitually use in deciding the validity of experience: it follows the train of thought in Thomas Reid’s “common sense” argument, we accept the validity of experiences that are regular, consistent, and shared (ie inter-subjective). The studies on mystical experience show that these experiences fit this criterion. Therefore, we should trust religious experiences, because they fit the criteria we use anyway. Religious experience arguments have always been assumed to be too subjective to interest philosophers or worry skeptics. Even in the famous radio debate with Bertrand Russell Father Copleston backed off religious experience for this reason, With this vast body of scientific work over the last 50 years, we have empirical backing in the form of 200 plus peer-reviewed Journal studies.

To order The Trace of God: Rational Warrant for Belief, click here.