In my book What’s So Confusing About Grace? I journey through several different ways of thinking about salvation that I held growing up (and into adulthood). Along the way, I summarize several “laws” that I came to believe were essential to salvation, including that which I call “Law 5”:

Law 5: If you are ashamed of Jesus, then Jesus will be ashamed of you. And if Jesus is ashamed of you, then God will send you to hell, even if you’ve already followed the other four laws. 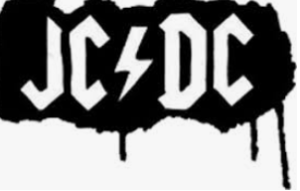 I haven’t been able to find a picture of my old JC/DC shirt online, but this graphic is very similar. (Source)

Law 5 meant that you had to undertake supererogatory acts of evangelistic proclamation in order to try and make sure you were saved. The article I included below is an excerpt from the book in which I describe my tortured teenage logic that sought to meet the demands of law 5 by wearing … an evangelistic (JC/DC) T-shirt.

Living Epistles T-shirts featured cheesy Christian puns melded with pop-culture references, to the end of fulfilling the Great Commission. I guess the point of the shirt was to provide a disarming way to initiate life-changing conversations about the Gospel. (In retrospect, I suspect the real effect was to serve as a warning: Beware, evangelical Christian approaching!)

Perhaps I should give you an idea of what I’m talking about. One shirt looked like the “Gold’s Gym” logo except it said “Lord’s Gym” and it depicted a buffed Jesus raising a cross emblazoned with the sins of the world. The accompanying line said: “Bench press this!” As if that weren’t bad enough, the back of the shirt showed a nail through a hand with the logo: “His pain, your gain!” (Subtlety was not the specialty of Living Epistles T-shirts.)

The shirt I bought came in basic black and was designed to look like a concert T-shirt for the heavy metal band AC/DC. But instead of the AC/DC logo, the blood red letters spelled out “JC/DC.” And what, you may ask, is “JC/DC” supposed to refer to? Um yeah, underneath the logo the caption read “Jesus Christ / Divine Current.” Although I never admitted to my motivations for buying this wince-worthy shirt, the truth is I got it to meet the demands of the fifth law. Surely if I was willing to walk down the halls proclaiming that Jesus is the “Divine Current” he could hardly tell God the Father that I was ashamed of him.

The only problem was that I was kind of ashamed.

But before you judge me too harshly, let me add that I think I was more embarrassed about the T-shirt than Jesus. I really did think Jesus was cool. But the T-shirt most definitely wasn’t. Nonetheless, even if my issue was with the shirt rather than the savior, I wasn’t sure that Jesus would be able to tell the difference. So I faced a crucial question: how could I embolden my witness? And how could I do it without completely sacrificing the modest social capital I had acquired with my peers? (Never underestimate the value of social capital to a teenager.) In retrospect, I was desperate to find some sort of loophole, a way to proclaim the Gospel boldly while minimizing the chance of mockery, personal humiliation, and social exile. But how?

Eventually, I lighted upon what I believed to be the perfect solution: I’d wear the JC/DC shirt to school alright, but I’d wear it underneath a flannel shirt. Of course, I recognized that I couldn’t cover the JC/DC shirt up completely, for that would obviously defeat the purpose. And so I decided to leave the flannel shirt unbuttoned so people would still be able to see the JC/DC logo underneath . . . at least partially. And this brings me to the real bit of genius: as the flannel shirt hung over my shoulders it would obscure the outer letters of the Living Epistles proclamation, leaving only the middle “C/D” visible to passerby. As a result, everyone would assume I was just wearing a regular AC/DC shirt when in fact I was boldly proclaiming Jesus Christ as the divine current.

Oh yeah! Absolutely brilliant, right? I had discovered a way to proclaim my faith boldly while retaining my dignity in the process! It was the perfect compromise. People who thought you couldn’t have your cake and eat it too had obviously never met me.

In short, I had squared the evangelistic circle.

Or had I? I didn’t know the word “casuistry” at the time, but looking back, it now seems that this so-called solution to my problem perfectly exemplifies it. Casuistry (at least in the form I was pursuing it) is the act of seeking extremely clever (if contrived) solutions to moral problems, solutions which are based on the search for loopholes as a way to follow the letter of the law while avoiding its spirit. Picture, for example, an older brother who is beating on his younger sibling. The mother calls out sternly: “Hey, stop punching your brother!” And so, the older sibling obediently stops throttling the poor kid . . . and shifts to kicking him instead. The casuist might be inclined to say that technically that boy followed his mother’s direction. But if he did follow her words, he surely ignored the spirit of her request. That’s a good example of a casuist’s subversion of the intent of the law.

When it came to the fifth law, I understood the demand to require extraordinary acts of evangelistic proclamation . . . acts like wearing a Living Epistles T-shirt. I believed that just as Christ had gone above and beyond to offer salvation, so I was now expected to return the favor by going out of my way to proclaim Jesus to the world.

And just so we’re clear, that’s an eminently reasonable demand, so it’s not like I’m complaining. To put it into perspective, it’s kind of like accepting a free Dyson vacuum cleaner on the condition that you agree to share the virtues of your new Dyson with your friends. Consequently, if you never speak a word of your great new vacuum cleaner to others, if you blush when they talk of the joys of owning a Hoover, if you remain silent when they lament their hopelessly soiled carpets, then it’s only right that you should give the Dyson back. After all, you didn’t uphold your end of the bargain: the least you can do is preach the virtues of the Dyson to family and friends!

Salvation was like that: it was a bargain, a reasonable quid pro quo: Jesus saves you, and all you need to do in return is tell your friends. Surely that isn’t asking too much. So if you don’t want to do at least that, if you don’t want to uphold your end of the bargain, then you can jolly well give your salvation back.

In terms of boldly sharing the virtues of Jesus with friends, wearing an emblem on my chest which attested to the divine current otherwise known as Jesus certainly seemed to qualify. So I wore the T-shirt to school. As for the flannel shirt that suspiciously obscured my witness, I rationalized the additional layer by noting that the school halls could be drafty and I didn’t want to catch cold. (Seriously, I told myself that.) While wearing the flannel shirt may have undercut the effectiveness of the proclamation, in my casuistic rationalization I had persuaded myself that this would still somehow qualify as boldness on Judgment Day.

Yeah, good luck with that.