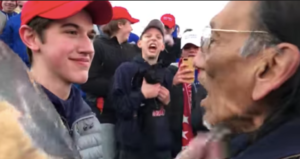 Note: the analysis of this article is based on outdated and incomplete information. For a fuller picture, please see my follow-up article here.

Like the rest of the world, I was enraged as I watched footage of the students from Covington Catholic High School mocking and threatening Vietnam Vet and Omaha Elder Nathan Phillips. One comment on YouTube directed toward the kid — “A punchable face” — perfectly captured my sentiment. Those teenage idiots are now the latest unwitting chapter in Jon Ronson’s book So You’ve Been Publicly Shamed. Hope you enjoy your public infamy, punks.

As for Mr. Phillips, he is a hero and his response to the racist taunts and threats of those idiots exemplifies true power, character, and poise. (He has been equally impressive in subsequent media interviews.)

However, I want to conclude by offering a modest word on behalf of the idiots.

In one of her books, Baroness Mary Warnock recounts the period in Post-War Britain when the horrific details of the Final Solution came to be known. She observes,

“[T]he horrors of the Holocaust became generally known at this time, and I reflected for the first time that humans have a great deal in common: I could not be sure that I did not have instincts as detestable as those of the Nazis, nor that I would have had the clarity of vision or the strength of character to resist these instincts, had I been a German at the time.”

By the same token, I ask myself, had I been a teenager from Covington Catholic High School in that moment, how would I have responded to Mr. Phillips? As I’ve thought about that, I cannot be sure that I would not have instincts as detestable as those of those idiots, nor that I would have had the clarity of vision or the strength of character to resist these instincts, had I been one of those kids at the time.