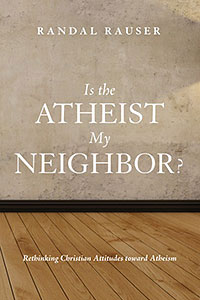 This article is an excerpt from my 2015 book Is the Atheist My Neighbor? Rethinking Christian Attitudes Toward Atheism. It’s a book that J.L. Schellenberg, one of the leading atheist philosophers of religion, recommended as “brief and lively but remarkably full and acute” and “impressively fair”. You can decide whether this brief excerpt lives up to those descriptions.

Let’s begin by considering Psalm 14:1, a text with which we are already well familiar from our survey of Christian attitudes toward atheism in chapter 2. Beginning with the “Atheist’s Day” anecdote, we saw that Christians have repeatedly appealed to this verse to support the Rebellion Thesis. But is that really a correct reading? James Spiegel certainly believes so. He speaks for many when he writes:

When smart people go in irrational directions, it is time to look elsewhere than reasoning ability for an explanation. And Scripture gives us clear direction as to where we should look. Consider the psalmist’s declaration that “the fool says in his heart, ‘There is no God’” (Psalm 14:1). The Hebrew term rendered “fool” here denotes a person who is “morally deficient.” And elsewhere in the Old Testament Wisdom Literature we learn of various symptoms of this moral deficiency. The book of Proverbs says “a fool finds no pleasure in understanding” (Proverbs 18:2), that “fools despise wisdom and discipline” (Proverbs 1:7), that “a fool finds pleasure in evil conduct” (Proverbs 10:23) and is “hotheaded and reckless” (Proverbs 14:16).[1]

As with several other Christian writers surveyed, Spiegel simply assumes the text applies to atheists and he infers from this that it supports the Rebellion Thesis. But are these assumptions justified? I will argue that they are not.

Let’s begin by conceding for the sake of argument (and only for the sake of argument) that the text is addressing intellectual atheists. In other words, when the psalmist speaks of the individual who “says in his heart there is no God,” what he is, in fact, referring to is the individual who denies that God exists (i.e., the atheist). On this interpretation, Psalm 14:1 reduces to the following:

(1) All fools are atheists.

(2) All atheists are fools.

And this is where the problem arises, for any attempt to infer (2) from (1) commits the logical fallacy of illicit conversion. To illustrate, all Ford Mustangs are cars, but it doesn’t follow that all cars are Ford Mustangs. By the same token, even if (1) all fools are atheists it doesn’t follow that (2) all atheists are fools, for it may be that other atheists are not fools (i.e., that they are intelligent, reflective people).[2] Since the Rebellion Thesis does claim that all atheists are fools, one cannot appeal to Psalm 14:1 to justify it.

Thus far I’ve granted for the sake of argument that when the Psalmist refers to the one who “says in his heart there is no God” we should understand that to mean “is an atheist.” Even with this assumption, I’ve demonstrated that the text does not logically support the Rebellion Thesis. Now it is time to go further and challenge the assumption itself, for I believe it to be demonstrably false. In order to see why, we can begin with an important hermeneutical truism: In any reading of a text, attention to context is of paramount importance. As Aaron B. Hebbard observes with only a touch of hyperbole, “Conceivably the three most important rules in interpretation are context, context, context.”[3] There are different levels of context relevant to understanding a passage, and we shall consider two here, the broader cultural context and the immediate literary/textual context.

We begin with the broader cultural backdrop (or worldview) in which this text was originally written. Our starting point is to recognize that intellectual atheism as it has been understood since the seventeenth century played no part in that cultural backdrop. As we saw in our survey, intellectual atheism is a phenomenon which belongs in large part to the modern world. While intellectual atheists in Europe were exceedingly rare prior to the seventeenth century, they were simply unheard of more than two millennia earlier in the Ancient Near East (ANE) when the psalms were written.

One simple way to illumine the radical difference between the ANE and the modern West is by recognizing that ancient peoples did not maintain the distinction familiar to our age between nature (the natural world of mundane human experience and scientific enquiry) and supernature (the spiritual world of God and created spirit beings). In our modern age, we clearly distinguish these two spheres. And so today theists attempt to conceive how God and the supernatural realm interact with the natural realm while atheists aim to do away with the supernatural realm altogether.

The crucial point to appreciate is that this whole debate is a modern one and thus it was simply not on the horizon of ancient peoples. While ancient peoples recognized there were aspects of reality inaccessible to them, they didn’t have a neat division between nature and supernature. Instead, they perceived reality to be a unified whole such that the natural world of daily life was freely explained in terms of the activity of divine beings. For example, natural events like floods, storms, droughts and earthquakes were all explained seamlessly as the actions of God or the gods.[4] The ANE world lacked the conceptual space to conceive the world apart from the reality of supernatural beings. Given this vast difference in worldview, it is hopelessly anachronistic to read back into Psalm 14:1 a modern atheistic position that conceptually distinguishes nature from supernature and then denies the existence of the latter.

So if the psalm is not addressing intellectual atheism, then what is it concerned with? At this point, we can shift our attention from the ancient cultural context of Psalm 14:1 to its literary context. To get a handle on that context we will expand our view beyond verse 1 to encompass the next two verses as well:

1 The fool says in his heart,
“There is no God.”
They are corrupt, their deeds are vile;
there is no one who does good.

2 The Lord looks down from heaven
on all mankind
to see if there are any who understand,
any who seek God.
3 All have turned away, all have become corrupt;
there is no one who does good,
not even one.

One thing becomes clear when considering the wider context of this psalm: The psalmist’s ultimate target is not intellectual atheists or any other subset of the human population. Instead, it is the whole human race. The point, as the psalmist makes luminously clear, is that all human beings have turned away, all are corrupt, and not one does good. This bleak picture provides us with the key to what is meant in the first verse. While everybody in the ANE professed belief in God (or gods) with his or her mouth, the psalmist observes that nobody lived consistently with that confession. While the entire human race may be the ultimate target, the immediate target is the community of Israel which confesses faith in Yahweh and yet fails to live up to that faith. (Covenantal faithfulness, like charity, begins at home.) Consequently, the psalmist is most immediately concerned to indict the rampant hypocrisy of those in ancient Israel who live as if God doesn’t exist, even while they profess that he does.

Given the fact that Psalm 14:1 is so commonly used as an indictment of atheists, it is surely ironic to observe that it is, in fact, an indictment of devotees of Yahweh who fail to live up to their professed belief. Indeed, the use of this text as a proof-text to smear atheists calls to mind Jesus’s strong words against the sin of (religious) hypocrisy. Consider as an example the following sober warning in Matthew 23:2-3: “The teachers of the law and the Pharisees sit in Moses’s seat. So you must be careful to do everything they tell you. But do not do what they do, for they do not practice what they preach.” Needless to say, it is the height of hypocrisy for religious leaders to enforce standards of observance on others that many in their own community (and perhaps they themselves) fail to maintain. To put it another way, how ironic it is that a text which was intended to warn against religious hypocrisy is instead proof-texted as a rhetorical bludgeon against atheists who make no such faith confession in the first place.

And just who is the fool exactly?

[2] Even worse, (1) is itself false because some fools are theists. In fact, I argue below that the real force of this passage is to serve as an indictment of, and warning for, those foolish theists.

[3] In case you’re wondering about the context of Hebbard’s statement, see Reading Daniel as a Text in Theological Hermeneutics, 142.