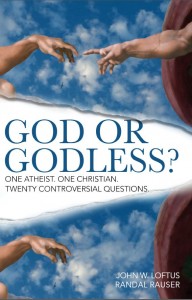 That’s the way it was supposed to work, anyway. But it didn’t quite work out like that. Consider chapter two where John chose the following debate resolution: The biblical concept of God evolved from polytheism to monotheism. Presumably, John assumed I would argue against this thesis. But instead, I argued against John’s assumptions that the truth of this thesis should present a problem for Christianity.

With that setup, I present my opening statement.

Five hundred years ago virtually all educated people in the West believed that the earth was the fixed center of the universe. Terra firma was the center of action while the poor sun was a mere satellite revolving around our proud, immovable station. We now know that this picture was, to say the least, a bit off. To begin with, our grasp of the size differential was all wrong. It now turns out that the earth is (if you’ll excuse the expression) the equivalent of a pimple on the sun’s fiery bottom. And as for fixed points, the only thing really fixed is the sun’s inescapable gravitational grip upon our tiny rock which has kept it spinning in lockstep for billions of years. To sum up, a rudimentary survey of our astronomical advances in understanding over the last few hundred years supports the following:

“The scientific concept of the universe evolved from geocentrism (earth-centered) to heliocentrism (sun-centered).”

The shift from viewing the earth as the grand fixed center of the universe to the lowly third rock out from the sun occurred through innumerable small steps and the occasional jolting leap due to the hard work of countless scientists like Copernicus, Galileo, and Kepler. We need not bother ourselves with the intricacies of that history here for the main point is simply this: Nobody thinks that we ought to reject heliocentrism because we once believed geocentrism. To suggest such a thing would be positively absurd.

Now we are in a place to discuss our topic: “The biblical concept of God evolved from polytheism to monotheism.” I don’t actually disagree with this proposition. Instead, I disagree with the implications one might try to draw from it. Allow me to explain. It is true that the biblical conception of God emerged out of a polytheistic culture which only later converged on the austere doctrine of monotheism. In the ancient near eastern milieu in which God first called Abram out of Ur everybody was polytheistic so it is no surprise that Abram was as well. His move was not to monotheism but rather to monolatry, the worship of one God in the midst of many. Centuries later at the exodus from Egypt the Hebrew understanding developed again. As Yahweh soundly defeated each one of the Egyptian gods, the Hebrews moved from “mere monolatry” to henotheism, the view that one God is far superior to all other gods. By the time we get to the writing of Isaiah some centuries later the Hebrew understanding had developed again. God was now understood to be so far superior to other beings that he was in a class by himself while all these other beings were demoted to mere creatures: “I am the first and I am the last; apart from me there is no God.” (Isaiah 44:6) So to sum up, it took several centuries for the Israelites to move from polytheism to monotheism just like it took western astronomers several centuries to move from geocentrism to heliocentrism. If you wouldn’t reject the results of astronomy because it reveals a developmental history why for that reason would you reject the results of biblical theology?

I suspect the perceived problem depends on the dual assumption that the biblical understanding of God is supposed to be revelation, and revelation is supposed to have been given in big leaps rather than little steps. By contrast, this view assumes that science comes in many diligent little steps rather than in leaps that might suggest revelation. But alas, this is a flawed description of both science and theology. So far as science goes, it is full of big leaps of revelatory insights, what scientists have often called “Eureka!” moments. For instance, think of that moment when Michael Faraday discovered the circular flow of electromagnetism based on his belief in the mystical significance of the circle (a belief drawn from his Sandemanian religious sect by the way). And as for the theology end, the theologian makes at least as many little steps as big leaps, including the countless modest steps in which the biblical writers from Abram to Isaiah moved the Hebrews from the chaotic welter of ancient polytheism to the austere grandeur of one creator Yahweh. Eureka indeed.