At this point, you’ve likely heard about Trump advisor Stephen Miller’s contentious interview with Jake Tapper on CNN’s Sunday morning program, State of the Union. In case you haven’t, here is the interview.

The intended format of this exchange was an interview. But Miller clearly came with different intentions. He refused to answer questions, he attacked CNN’s journalistic standards, and he poured effusive praise on the President, even to the point of repeating the same anecdote like a Chatty Cathy doll.

In other words, the President loved the interview. As soon as Tapper summarily shut the exchange down, Trump tweeted:

Jake Tapper of Fake News CNN just got destroyed in his interview with Stephen Miller of the Trump Administration. Watch the hatred and unfairness of this CNN flunky!

Not surprisingly, many of Trump’s supporters quickly endorsed his assessment on Twitter:

Is it any surprise that Trump’s critics saw a completely different interview? This is one of the first critical responses to Trump: 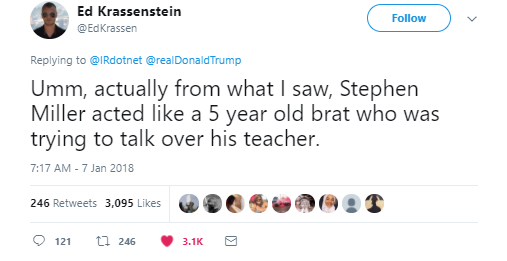 On this point, I recall my series of three public debates with atheist John Loftus in 2013 following the publication of our book God or Godless. Here is our Edmonton debate:

I believe Loftus did a terrible job and lost the debate. And I have heard similar evaluations from many people, including one atheist who attended the Calgary debate. However, some atheists that posted comments below the YouTube posting thought otherwise. To be sure, there is no intelligent commentary (I think that goes against YouTube’s commenting policy). But there is much provided by way of opinion. One commenter stated, “one might have to be on drugs to take Rauser’s arguments seriously.” Another dismissed my presentation (along with the comments of the moderator, Myron Penner) as “utterly rubbish”. And while I heard from many Christians that John came across as brash and obnoxious, one YouTube comment describes me as a “snotty Christian”.

To be sure, I still believe Jake Tapper bested Stephen Miller in their encounter. And I believe I defeated Loftus in this debate. Nonetheless, the polarized nature of these response illustrates the limitations of the debate medium as a means to illumine contentious issues.