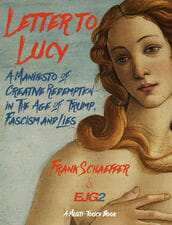 Frank Schaeffer and EJG2, Letter to Lucy: A Manifesto of Creative Redemption in the Age of Trump, Fascism and Lies, A Multi-Touch Book, 2017. (E-book)

When I started reading Letter to Lucy  I assumed it was a book. I was quickly  — and very pleasantly — disabused of that assumption. It turns out that it is something far better: an open invitation to come over to Frank Schaeffer’s house for an expansive and meandering exploration of art, life, and love. The format is an extended address to one of Schaeffer’s granddaughters, Lucy. Fortunately, we are invited along for the ride.

The reference in the subtitle to “Trump, Fascism and Lies,” had me worrying that the bloviating huckster-in-chief would occupy a disproportionate share of the conversation. Fortunately, that is not the case. Very soon our tortured political milieu moves to the background as Frank reminisces about growing up at L’Abri in Switzerland and being co-opted (along with his famous father Francis) by the religious right in the 1970s. We are invited to listen in as he recalls the tender intimacies of his relationships with his mother and his wife. And we are appalled to learn that footage Frank filmed of Michelangelo’s “David” for the documentary How Should We Then Live? was left on the cutting room floor for fear that the statue’s marble genitalia would offend puritanical Christian sensibilities.

Along the way, those personal reminiscences are punctuated by countless fascinating excursions into art, music, and the noble pursuit of the aesthetic. Frank invites us to listen to music — the format supports both audio and video clips — ranging from Camilla Tilling’s operatic transcendence to Green Day’s wall of sound.

As we meditate on art both famous and obscure, Frank also takes some well-aimed potshots at the absurdities of the modern art market. (There is no better way to appreciate Frank’s point than to visit London’s National Gallery and the Tate Modern in the same day as I once did. At the end of that long day it was clear — to me at least — which of these collections deserved to be loved a thousand years from now.)

While the book dazzles with the grandiosity of its vision and eclectic sweep of its engagement, my favorite moments are found in the intimate portraits of Frank, a stay-at-home grandfather, and his beloved grandchildren, including the inimitable Lucy. Consider, for example, the moment where Frank recalls sharing some fifty year old sparklers with Lucy on Christmas:

The next night was Christmas Eve. Lucy wanted to burn more sparklers and said, “Let’s go outside and walk around in the dark.” So after supper we walked out to the marsh. By the time we got to the river, we could no longer see our house behind us through a thick fog. The lights on the Newburyport waterfront across the river were making misty halos. We stood on the cold muddy tidal flats by the edge of the water, and I lit a sparkler. As Lucy waved it, the shards of glittering light were reflected on the dark water and her eyes.

“Let’s wish the river a happy Christmas,” I said.

“Happy Christmas, River!” Lucy called out and waved the sparkler. Then in a sleepy voice Lucy whispered, “The lights across the river look like angels.”

When we’d used up our cache of sparklers, I picked Lucy up. She lay back in my arms staring up at the dark sky. As we walked home across the marsh, she held me close and pressed her cheek to mine. I trudged through tall dry grasses with the mud and water squelching underfoot as we passed by our little stand of dying maples. They had barely leafed that year and then dropped their leaves far too early in the autumn. As I walked clutching Lucy I was thinking about the fact that the marsh, our front lawn, the maple and crab apple trees growing on the margin, the porch in front of our house–all of it was sooner than later going to be gone. I knew we were walking through what was to become the watery graveyard of Lucy’s childhood memories. And what cut me to the heart was that unknown to the child in my arms, I’d played a bit part in facilitating the coming deluge that would obliterate this magical realm of her childhood. (337)

So much is woven into this intimate portrait: Frank’s love for his granddaughter; the profundity found in the ephemeral beauty of shared moments like a sparkler sputtering into the misty darkness; and the combination of fundamentalist theology and bloodless corporate interest that is even now spurring the environmental crisis of global warming and sea level rise.

What is it like to read Letter to Lucy? At this point I am reminded of the time I visited another London museum: the famed Victoria and Albert. I arrived in the morning at the V&A. Hours later when I left I was surprised to discover the sun had already set: apparently I had whiled away an entire day wandering among its endless displays.

Reading Letter to Lucy is like that. Wandering among the book’s 435 pages — many of them works of art in their own right thanks to coauthor EJG2 — is an incredibly easy and satisfying way to while away an entire day.

So Frank, thanks for inviting me over.

You can read a sample chapter of Letter to Lucy here. Even better, you can purchase a copy at iTunes. Note: the book is currently only available for ios devices.  To purchase a copy, click here.

Thanks to Frank Schaeffer for a review copy of the book.