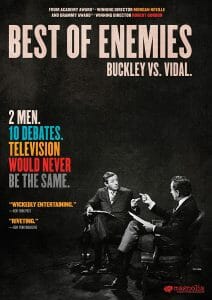 As the old wisdom goes, there are two topics not fit for polite conversation: religion and politics. If you ever need an illustration of why, you might return to the famous live televised debates between William F. Buckley and Gore Vidal which unfolded during the 1968 Republican and Democratic National Conventions.

It would be hard to envision a more polarizing pair: Buckley the faithful Catholic political conservative squaring off against Vidal, the atheist libertine novelist. And that very polarization, it turns out, was the secret sauce of success.

Throughout the month of August, these ten debates unfolded before an audience of millions: two brilliant pundits, eloquent defenders of their respective views, and yet each barely able to suppress his deep loathing, his utter contempt, for the other.

Finally, any pretense of good will and civility evaporated as Vidal called Buckley a “crypto-Nazi”. Enraged, Buckley snapped back in his inimitable mid-Atlantic accent that Vidal was a “queer”. To cap it off, Buckley then leaned in his seat and threatened to punch Vidal in the face.

The infamous exchange may have verified the common wisdom: if you don’t want to risk a punch in the face, then for goodness sake, avoid religion and politics. But it also verified a new bit of wisdom: if you want great TV, then let polarized pundits have at it while the cameras roll.

Fast-forward to the present and it becomes clear that this series of exchanges which unfolded live on TV fifty years ago provided the basic format for so much contemporary cable news. Great TV, perhaps, but rather less helpful for cultivating healthy, civil society.