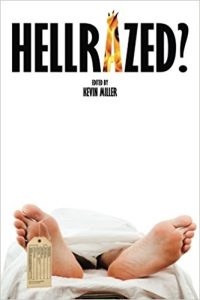 Five years have passed since Kevin Miller’s provocative documentary Hellbound? was released. The film explores concepts of the afterlife (in particular, the doctrine of eternal conscious torment), and how they shape the life and belief of the church here and now. I met Kevin at that time as I had the privilege of hosting the film’s screening here in Edmonton. (You can read my review here.)

In recognition of that five year anniversary, Kevin has edited a book titled Hellrazed? which consists of a collection of short essays by an impressive list of contributors to and supporters of the film including Frank Schaeffer, Robin Parry, Brian Zahnd, Derek Flood, Brad Jersak, Michael Hardin, and Eric Reitan.

Oh, and I even got a pithy essay included!

The book is now available to purchase on Amazon.com. Within a month, it will also be available on Amazon.ca, Chapters/Indigo, Barnes & Noble, Ingram, etc. Also, keep in mind that Kevin Miller is offering a special deal on his websites (link below) where folks can purchase the book and DVD together for a discount. And just in time for Christmas!
Amazon.com (United States)
Canada: https://www.kevinmillerxi.com/store2.html
United States and the rest of the World: http://hellbound.storenvy.com/