Wow. I just read Louis C.K.'s admission of guilt and his unqualified statement of remorse. I pray he'll find true forgiveness from the Lord, but you have to appreciate his clarity and his candor.

I couldn’t resist drawing a comparison at this point between Louis C.K.’s mea culpa and Roy Moore’s aggressive denial of the accusations with him. And with that we were off: 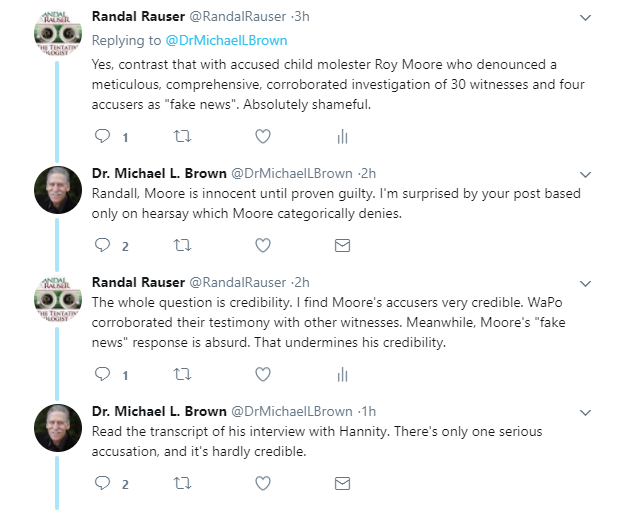 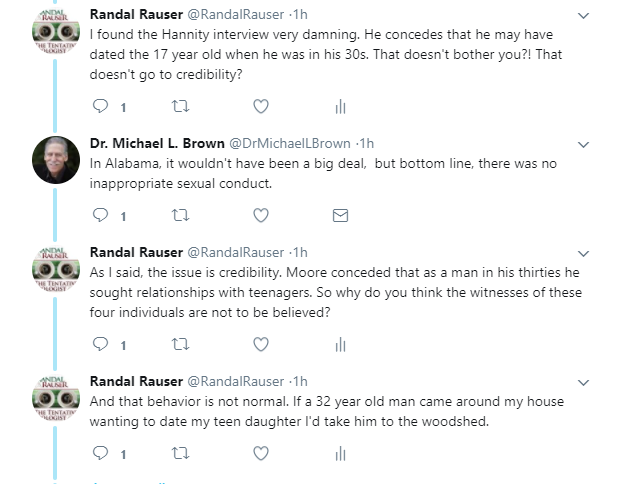 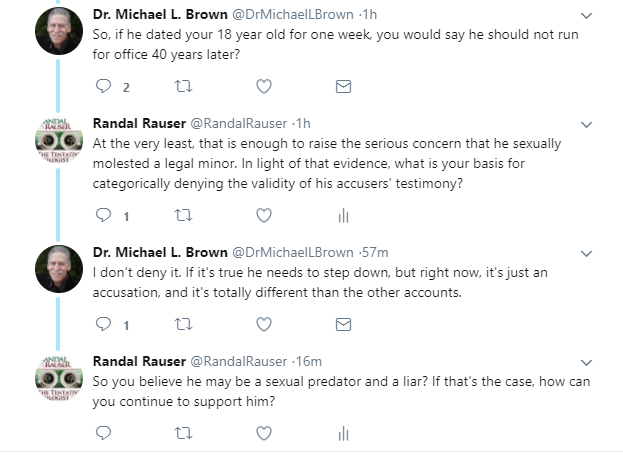 The first point I want to return to is that one need not wait for the results of a court proceeding to render one’s personal judgment based on available evidence. Consequently, Brown’s initial response that Moore is innocent until proven guilty is irrelevant: he may be legally innocent in the face of the law, but that doesn’t mean he is innocent. Nor does it mean one must suspend judgment as to his guilt.

This brings us to the second point: when it comes to assessing he said/she said (or he said/ she, she, she, and she said) evidence, we need to look to credibility. I already stated that I find Moore’s accusers credible. Moreover, they have no motivation to lie. And in this highly polarized political climate, one can only imagine the degree of abuse to which these four women may be subjecting themselves by coming forward. Furthermore, Moore’s four accusers are corroborated at several points by additional witnesses who were interviewed for the WaPo article.

By contrast, I don’t find Moore credible and he clearly has many reasons to lie.

What is more, note first that Moore’s rebuttal to the article is utterly implausible. He does not dispute specific claims within the article. Rather, he denies the entire article in toto as “fake news” and a democratic conspiracy.  So we are to believe that the DNC bought off these four women and the two dozen other witnesses and the DNC concocted their stories, and the DNC did this all to defeat Moore?

Can anyone take such a claim seriously? The DNC would literally need to buy off dozens of people to sustain such a mass conspiracy. And this is to say nothing of the Pulitzer Prize winning Washington Post which would be putting its entire reputation on the line by perpetuating a massive hoax.

Clearly Moo’re charge is absurd. And the very fact that he has the gall to respond in this way undermines his credibility as a witness.

Next, I would suggest the reader listen to Moore’s telephone interview with Sean Hannity. Note in particular how Hannity asks Moore whether he dated teenagers when he was in his 30s. It’s a simple question. But in response Moore hems-and-haws until he finally settles on the response that he doesn’t remember any such relationships. Good grief, this is not a confidence-inducing response and it only goes to further undermine Moore’s credibility.

As for Michael Brown’s defense of Moore, I’ll note two things. First, Brown attempts to normalize men in their thirties dating teenage girls. One sees this in two tweets: in the first he says that Moore’s actions (at least in dating 16-18 year olds) wouldn’t be a big deal in Alabama; further, he is incredulous to the notion that a 32 year old man dating an “18 year old” should be censured decades later. Both of these tweets are clearly intended to remove the offense of a man in his thirties dating a child half his age. And I find that shocking.

Second, at the end of our exchange Moore states that he does not deny the accusers charges: that is, they may be correct. We must not miss the significance of this concession for it means that Brown is admitting based on the available evidence that Moore may indeed be a pedophilic sexual predator and a liar. But if Brown believes Roy Moore may be a pedophilic sexual predator and liar, then how can he continue to support him?

Suffice it to say, I found this to be a very dispiriting exchange, and I continue to be surprised and depressed at the lengths people — and Christians in particular — will go to sustain their partisan loyalties.