As others have suggested, #MAGA should stand for "make America godly again." We can only be greet if we are good. #SavingaSickAmerica. 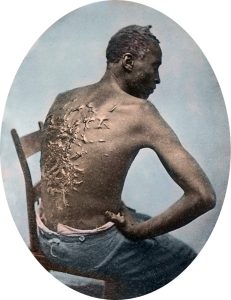 This is the iconic image of escaped slave Gordon during an 1863 medical examination, his body latticed with scars from severe whippings.

That tweet got my attention. So I asked Dr. Brown (via Twitter), to which point in American history is he referring? That is, which period of godliness from the past is it to which he wishes to return?

He replied: “Let’s start with our godly, colonial foundations, foundations that birthed schools like Harvard and Yale as Christian schools.”

In response, I pointed out that this period of allegedly greater holiness was the same period in which the institution of slavery was widely practiced and women were considered inferior citizens who were denied the right to vote.

Dr. Brown replied as follows: “The colonies were divided over slavery; and yes, women couldn’t vote — but I’d take the godly climate then over today anytime.”

Frankly, I was a bit surprised by that response. In the last two years I’ve watched two powerfully horrendous films depicting the scourge of American slavery (12 Years a Slave and The Birth of a Nation). In light of those harrowing cinematic experiences, I find it nearly unimaginable that somebody could deem that dark period in American history more “godly” than our present age.

I replied to Dr. Brown by asking, if he was a black man, would he prefer to live in colonial America or in America today? Once again, I was (to put it mildly), surprised by his response: “Not sure, honestly. But nothing in what was best in America contributed to slavery. Instead, that’s what led to their freedom.”

I appreciate Dr. Brown answering my questions. But I am astounded that somebody would hedge on whether they would prefer to live as a black man in contemporary society rather than in the hellish period depicted in The Birth of a Nation. Contemporary America is still far from a racially just society, but it is orders better than the antebellum United States. This is not a disputable point!

The same points apply to the status of women.

And also that of the mentally and physically infirm. And other visible minorities. And the elderly. And countless other individuals too.

So what’s going on here?

While the last 150 years represent undeniable improvements in our journey toward the good society, it would seem that this phenomenon of social improvement fits poorly with the pessimism of premillennial Christians according to which the earth should be in a death spiral until Christ returns.