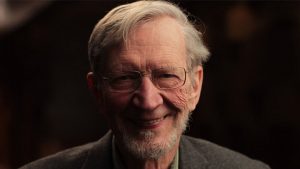 Living legend Alvin Plantinga was recently a guest on Unbelievable with Justin Brierley. The show was classic Plantinga — clear analysis, dry wit, admirable humility — and surveyed some of the highlights of his impressive career including warrant, proper basicality and Christian belief, the evolutionary argument against naturalism, and the ontological argument.

The last choice was a bit of a surprise. To be sure, Plantinga is among the most important of contemporary voices in revitalizing the ontological argument (along with Charles Hartshorne and Norman Malcolm, among others). And his treatment of the topic in The Nature of Necessity remains a model of careful, analytic modal reasoning.

That said, the ontological argument has always been something of a philosopher’s plaything — an apparatus on which to exercise one’s modal muscles and analytic intuitions. Personally, I would have preferred hearing more of Plantinga’s thoughts on science and Christian belief, an area to which he has devoted significant attention in recent years.

Nonetheless, Plantinga’s discussion of the ontological argument was intriguing, if somewhat deflationary. Brierley shared some questions inquiring into whether Plantinga viewed the argument as a proof or whether, as he had once said, it showed belief in God to be rational. Plantinga replied:

“I don’t think it proves the existence of God.”

That in and of itself is hardly surprising. In the 1990 Preface to God and Other Minds Plantinga points out that few if any arguments in philosophy might be counted proofs (i.e. a valid argument with such intuitively luminous premises that it can only be denied on pain of irrationality). So it is no objection to Plantinga’s modal ontological argument that it isn’t a proof.

“I don’t propose it as a really strong argument.”

Plantinga doesn’t say what a “really strong argument” should look like, but I’m guessing that in addition to validity, he’s thinking it would also include the ability to persuade somebody of the conclusion who is not already inclined at the outset to accept that conclusion. (George Mavrodes once wrote an essay titled “On the Very Strongest Arguments” which provides an intriguing survey of ways one might think of success in terms of arguments and the fabled “proofs”.)

So if the argument is not really strong, what good is it? Plantinga then said this:

“It’s more like part of the logical geography of God and divinity.”

I find myself in agreement with this statement. Just the other day I was lecturing on the traditional theistic proofs and I said something very similar of the ontological argument. As I see it, the argument shows either that God exists of necessity or God cannot possibly exist. The challenge is that we seem to have conflicting intuitions. On the one hand, it seems possible that God exists (from which it follows he must exist). On the other hand, we have intuitions that it is possible that God not exist (from which it follows that he cannot exist).

So the ontological argument may not be “really strong” insofar as it would show us that God does exist. But it is nonetheless useful in laying out the “logical geography” of God’s existing.

Finally, what about Plantinga’s claim so many years ago that the ontological argument makes belief in God rational? Plantinga 2017 replies:

“That’s a claim that I did make, but I’m not so sure that it shows even that.”

Second, and perhaps more importantly, this argument would at most support rationality for a small cadre of philosophers and other thinkers who have contemplated the argument (and perhaps for a smattering of others who might believe based on their testimonial authority). But it would leave untouched the rational status for the unwashed masses of theists who are unfamiliar with the argument or the defenders of it.

On September 24th Plantinga received the Templeton Prize (£1.1 million!) for his contributions to philosophy of religion. While the prize is well deserved, I can’t help but end with this charmingly deflationary assessment of his own signature ontological argument:

“It really doesn’t seem to me the argument shows much at all. It’s not one of the more powerful arguments…”