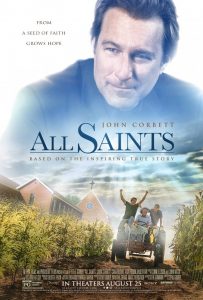 A few weeks ago I was invited to attend a pre-screening of All Saints, a “Christian movie”. I’m not sure what a Christian movie is, but as best I can guess, in popular parlance it is a movie marketed to evangelical Christians.

That in itself is enough to make me skeptical. As a cinephile, I’m interested in good movies. As a Christian, I’m interested in morally significant movies. If you want to see the confluence of these interests watch a movie like Short Term 12. (See my article “Finding Jesus at the movies, but not in Jesus movies.”)

Needless to say, movies that are distinguished primarily by their appeal to evangelical Christians offer little guarantee of either quality or moral significance. As a result, I came to the screening of All Saints predisposed not to like it. In case you’re inclined to judge me, keep in mind that I’ve seen both God’s not Dead and God’s not Dead 2, so I have reason to be skeptical.

So I was more than a bit surprised to find that All Saints won me over. To be sure, I’m not claiming it’s a work of art. But it was reasonably good and it was indeed morally significant.

The film is based on a true story and features John Corbett, one of the most eminently likeable actors working today, as an Episcopalian priest assigned to a dying church with the express intent of closing said church within a few months. Instead, the church ends up embracing a marginalized population of immigrants (a sadly subversive message in the age of “build the wall!”).

Together the church and its new membership of immigrants decide to try their hand at farming, raising crops in pursuit of sustainability. By the end of the film we are treated to an abundant harvest, but not the one we expected. (How’s that for walking the razor sharp line of the spoiler alert?)

All Saints presents a powerful message of social justice love and inclusion bereft of the heavy-handed  repentance/conversion narratives and culture war themes of your typical evangelical Christian films. Indeed, the film portrays Buddhists and nones in a positive light as they rally to the aid of the fledgling congregation. Within this cinematic context, that’s practically revolutionary.

And to top it all off, St. Thomas Church, the New York Episcopalian church immortalized in Burton Cummings’ song “I’m Scared,” even gets a mention.

So here’s the bottom line: by the time the credits rolled, I was a convert. All Saints is not going to win an Oscar, and it wasn’t even in contention for the Palm d’Or at Cannes. But if you value movies that are (reasonably) good and/or morally significant, I’d say this film has earned your theater-going dollar.