13 So God said to Noah, “I am going to put an end to all people, for the earth is filled with violence because of them. I am surely going to destroy both them and the earth. […] 17 I am going to bring floodwaters on the earth to destroy all life under the heavens, every creature that has the breath of life in it. Everything on earth will perish. (Genesis 6:13, 17)

“I know for a fact this is the worst flood Houston has ever experienced.” (Patrick Blood, Weather Service meteorologist) 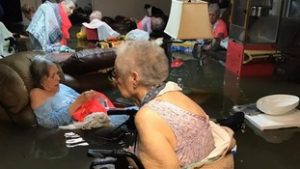 A photo of the residents of the La Vita Bella Nursing Home in Dickinson, TX in their flooded facility awaiting rescue.

Did God literally flood the earth as a form of punitive judgment on a sinful humanity? And if so, could he do it again? Could he be doing it right now in particular regions of the earth? Regions like Houston and southeast Texas?

As you can probably guess, the suggestion that God might be punishing Houston and southeast Texas by way of a hurricane-induced flood will be met with universal incredulity (to say the least). Many Christians will insist not only that God is not punishing Texas via a flood but that God would not do such a thing.

There are at least three considerations which strongly support that categorical judgment.

According to one report, four children and their great-grandparents drowned when their van plunged into a raging torrent while trying to escape the flood. But the children’s great uncle escaped. Should we conclude that the children (including a six year old) and their great-grandparents were justly drowned as punishment for some actions while the great uncle was properly spared?

In short, the devastation and suffering resulting from this kind of natural disaster appears arbitrary and indiscriminate. That is the first reason people are rightly skeptical that it should be interpreted as punishment.

Second, natural disasters like the Texas flood lack an interpretive context. Imagine, for example, that Billy steals a cookie from the cookie jar. His parents observe his deceptive action but they say nothing. Then, six months later, Billy’s parents tell him he cannot watch any television or play video games for the day. The punishment is a response to Billy’s deception six months earlier, but Billy’s parents never tell him their actions are punishment for his deception. Note that even if the punishment is a proportional response to the indiscretion, nonetheless it would be wrong for Billy’s parents to punish him without explaining what the punishment was for. Proper punishment (whether punitive or reformational) requires the one being punished understand the link between indiscretion and punishment.

Needless to say, there is no voice from heaven instructing all the people of Texas that they are being punished for some particular set of indiscretions. Consequently, the lack of interpretive context to explain the punishment to the ones being punished supports the conclusion that this flood is not, in fact, punishment.

Finally, if the flooding in Texas were punishment it would certainly qualify as cruel and unusual. From elderly people slumped over in their wheelchairs, waist-deep in fetid, sewage-laced water to terrified children being pulled under a raging current, the suffering produced by the floods in Texas are horrific and simply not explicable as a proper form of punishment for any crimes.

As I write, the official death toll resulting from Hurricane Harvey sits at 3, but as the reports roll in (including that of the four children and their grandparents), it is tragically clear that many more will suffer the ultimate loss from this flood: the deprivation of their own lives by way of drowning.

A decade ago at the height of the controversy over water-boarding as a means of interrogation, Christopher Hitchens submitted himself to be water-boarded — a process that simulates drowning — to see if it really qualifies as cruel and unusual punishment. The memorable title of the article he wrote, “Believe me, It’s Torture,” tells you his conclusion. Nonetheless, it is worth quoting his account at some length:

“In this pregnant darkness, head downward, I waited for a while until I abruptly felt a slow cascade of water going up my nose. Determined to resist if only for the honor of my navy ancestors who had so often been in peril on the sea, I held my breath for a while and then had to exhale and—as you might expect—inhale in turn. The inhalation brought the damp cloths tight against my nostrils, as if a huge, wet paw had been suddenly and annihilatingly clamped over my face. Unable to determine whether I was breathing in or out, and flooded more with sheer panic than with mere water, I triggered the pre-arranged signal and felt the unbelievable relief of being pulled upright and having the soaking and stifling layers pulled off me. I find I don’t want to tell you how little time I lasted.”

Now, if you dare, try to imagine the experience of four small children and their great-grandparents being pulled under those swift-moving floodwaters. Surely, the reasoning goes, no good and just God would exercise punishment of his creatures in this manner.

Of course, that conclusion now gives rise to a tension with the biblical narrative. Now as the reader turns to biblical accounts of divine punishment through natural disaster such as we find in Genesis 6, one must choose: either,

(1) find a way to reread the narrative according to which God did not literally at some point in the past punish a diverse population in a particular geographic region by way of a flood;

(2) accept that it is at least in principle possible that God is punishing Texas by way of a flood.