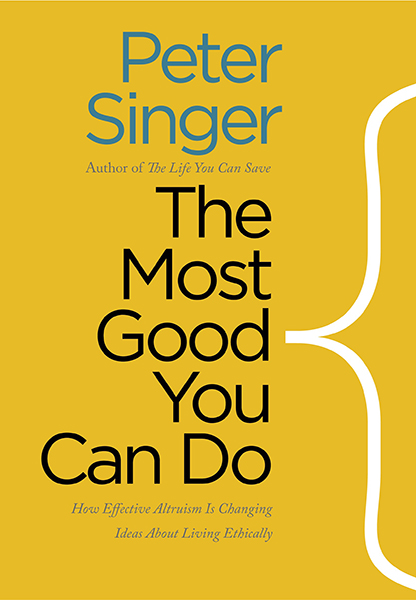 Peter Singer. The Most Good You Can Do. Yale University Press, 2015.

When I was a kid I once endured the indignity of traipsing door-to-door selling raffle tickets for my school. Most neighbors obligingly purchased a ticket for a prize they didn’t really want (an old donated car). But after listening to my sales pitch, one neighbor politely replied:

“Okay, very nice. However, I’m not going to buy your $1 raffle ticket, and here’s why…”

He then went on to deliver a sanctimonious lecture on how he and his wife had devised a plan to maximize the effective disbursement of their limited dispensable income so as to ensure it would have the greatest impact. To that end, they had researched a list of the most effective charities and they now concentrated all their charitable giving to those groups.

Not surprisingly, my school raffle had not made the short list of preferred charities.

As I walked back down that guy’s long driveway, I had a few choice words for him. Needless to say, “effective altruist” was not among them. And yet, after reading Peter Singer’s 2015 book The Most Good You Can Do, I have concluded that this is indeed what he was.

So what exactly is “effective altruism”?

To answer that question we should begin by noting that many people who give to charities are so-called “warm glow givers” (5). That is, their charitable donations are spurred by vivid and emotional stories and images. Think, for example, of the famous Sarah Mclachlan ASPCA commercials:

No doubt about it, that commercial is a tearjerker. The images of mournful dogs and cats complemented with Sarah’s soulful soundtrack has proven sufficient to open many wallets. (Incredibly, according to Mclachlan the series of ads generated more than thirty million dollars in donations for the ASPCA.)

Warm glow giving may be driven by an emotional response which makes the giver feel good, but is “following your heart” the most effective way to allocate limited resources to improve the world? In this excerpt from his “Mr. Universe” comedy show, Jim Gaffigan offers a humorous take on the ASPCA ads (watch until 5:12):

As the canine stars of Gaffigan’s humorous sketch put it, “This is a little heavy-handed Sarah. We are just dogs after all. There’s still kids starving in Africa, right?”

So what would it look like to focus on critical thinking and evidence rather than the warm glow? What would it mean to strive to make our altruism fully effective?

We will likely not all agree on how to answer that question (for further discussion see below). However, I do believe that Singer is right to push back against the lure of warm glow giving.

And let me add a point that Singer doesn’t make: we also need to push back against perfunctory giving. I suspect that many people give to particular charitable organizations without much reflection or warm glow. (I’m thinking in particular of Christians and other religious people donating to their religious communities.) Such giving is often perfunctory in nature, and it too fails the demands of reason.

Whether your giving is driven by a warm glow or a perfunctory commitment, Singer is right: we need to apply reason and evidence to ensure we are getting the most bang for our charitable buck. This involves both the eye of the pragmatist (what’s my return on the dollar?) as well as the philosopher (should I donate to stray dogs or starving children?). Let’s take a look at Singer’s contributions on each of these points.

The Eye of the Pragmatist

When it comes to the pragmatist’s focus, for years I depended on charitynavigator.org to guide my charitable decisions. So it was disheartening to read Singer’s critique of the website and their ratings:

In 2012 Charity Navigator’s website had 6.2 million visits. It rates about seven thousand charities, including all of the better-known ones, and has the capacity to rate one hundred new charities a month, but it can do this only because its ratings are so superficial. Until 2011 they were based solely on the financial health of the charity, using information taken from a form that all charities in the United States must provide to the Internal Revenue Service. That form is also one element of a second dimension added after 2011, accountability and transparency. The other element of the assessment of accountability and transparency is the organisation’s website. None of this information tells us anything about the outcomes of the charity’s programs. Charity Navigator plans to add a third dimension that will report on the charities’ achievements, but to do that properly for seven thousand charities would be a mammoth undertaking, and Charity Navigator has not set a timetable for doing it.” (150)

But Singer does not simply curse the darkness: he also shines a light. In fact, he shines several lights. For starters, he commends the ratings of another website, GiveWell. Unlike Charity Navigator’s thousands of superficial ratings, GiveWell commends a handful of charities. Those endorsements, while few in number, guarantee that one’s dollars will produce a maximal impact in terms of alleviating/preventing suffering. (For example, GiveWell endorses a charity that focuses on distributing mosquito netting in the tropics to prevent the spread of malaria and other mosquito-borne illnesses. A modest donation to this charity has a proven track record to prevent infections and thus avoid suffering and death.)

Singer also shines a light in terms of providing valuable guidance to ensure other charities become more effective. For example, he commends the use of arbitrage (114) and randomized controlled trials (154).

On the latter point, he notes that many people are resistant to the use of such trials. For example, when Elizabeth Bintliff, vice president of Heifer International’s programs in Africa, was invited to implement randomized controlled trials to test the effectiveness of their programs she refused: “We’re not about experiments,” she said. “These are lives of real people and we have to do what we believe is correct.” (155)

Singer retorts, “To those who say it is unethical to ‘experiment with people’s lives,’ the proper response is that the alternative–failing to use the resources available to improve the lives of as many people as possible–is much worse.” (156)

The Eye of the Philosopher

When it comes to the practical dimension of the argument I find Singer’s case to be very compelling. We definitely need to apply critical thinking to charitable giving: warm glows and perfunctory habits are simply not enough. And The Most Good You Can Do is chock full of practical advice to maximize the effect of our giving.

However, when it comes to the eye of the philosopher, matters become more complicated. It is no secret that Singer is the world’s foremost utilitarian and like every other normative philosophical theory, utilitarianism is controversial.

The objections to utilitarianism are well known. For example, if an action like torturing an innocent person could produce the most good for the greatest number then it would become morally permissible or even obligatory to torture an innocent person. Singer notes another case in which his utilitarian principles could justify the conclusion that “at least some of the guards and Auschwitz were not acting wrongly.” (53) This conclusion alone will be sufficient for many critics to repudiate utilitarianism.

Singer also insists that any view which privileges human flourishing is guilty of “speciesism.” Needless to say, those who begin with the principle that human beings are ontologically privileged will find the charge of speciesism itself to be specious.

[For those who are interested, Singer succinctly describes the debate over utilitarian reasoning as involving the conflict between two moral principles: “Do no harm” and “Do the most good you can” (a conflict of intuitions famously illustrated in the Trolley Problem).]

I’ll consider one more point. Key to utilitarian thinking is the principle of the equal consideration of interests: in the famous words of Jeremy Bentham, “each to count for one and none for more than one.” While there is something generally plausible about this principle, it becomes very implausible when applied consistently. Imagine, for example, if you attempted to treat each child you meet — let alone each child in the world — as equal to your own.

Singer recognizes that we cannot help but privilege our own kin to some degree:

“Nor would we want to discourage such bias because children thrive in close, loving families, and it is not possible to love people without having greater concern for their well-being than one has for others.” (8)

What is revealing is that Singer then goes on to suggest that all privileging of one’s own kin is a concession to our inability to be perfectly good:

There is certainly much more that could be said here, but suffice it to say many people will find this idea to be wrongheaded: the saint is not the person who manages to treat all children as indistinguishable from their own.

What Christians Can Learn from Peter Singer

Few academics have been vilified among Christians like Peter Singer. And given our sound-bite age, it isn’t hard to see why: Singer’s rigorous application and defense of his philosophical position has led him to defend the ethics of such unsavory positions as infanticide and bestiality (aka “zoophilia”) and that makes him an easy target for many.

I agree that those positions are deeply problematic, and that counts among the reasons I could never follow Singer down the utilitarian road. But if Singer’s philosophy has unsavory implications, it also gets a lot right and it offers a stark, prophetic challenge to Christians. Throughout the book Singer is challenging the reader to consider how he/she can minimize suffering and maximize good, and I can only wish that more Christians (myself included) took this challenge as seriously as does Peter Singer. Consider this passage:

“Popes, bishops, and priests are quick to condemn supposed sins like the use of contraception, homosexual acts, and abortion, but they are much less willing to speak out against the blatant failures of wealthy Catholics to give to the poor what the Church says is owed to them.” (27, emphasis added)

Bam! Talk about nailing the problem of consumerism/materialism which is a major target of the book. (Needless to say, Protestants fare no better in this regard.)

This brings me to some difficult questions. Christians are no different from the general population in that our giving is often framed by sub-rational (warm glow; perfunctory) impulses. And we need to ask the same questions that Singer raises with admirable rigor: are we giving as we should?

Consider the fact that many Christians give to their local church as their primary (or sole) form of charitable giving. Now of course, the Christian will value particular activities — e.g. evangelism and church planting — that Singer will consider to have little-to-no value. Nonetheless, it is worth asking whether a larger portion of one’s charitable giving ought to be allotted to charitable agencies with rigorous and well-established positive impacts.

Singer also raises the hard question of whether one can justify giving to the Arts and higher education in a world where people die for lack of clean drinking water and 50 cent medications. This is a hard question and one that Christians should ask as well.

In a world where millions still live in poverty can we justify replacing the church carpet or investing in seminary scholarships?

The questions are difficult, but that’s all the more reason to ask them.

Karl Marx famously opined, “The philosophers have only interpreted the world in various ways; the point, however, is to change it.” Well, Peter Singer is one philosopher who is trying his best to change the world. And while I don’t agree with all the philosophical underpinnings of his case, I do agree with the need to apply reason to charitable giving. And that in turn forces me out of my ivory tower and into the daunting place of asking:

What’s the most good that I can do?