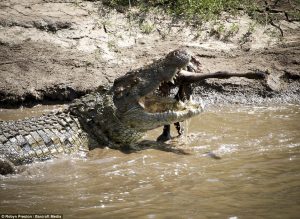 Natural evil concerns any suffering within nature which is not the result of the morally culpable actions of a moral agent. (For my previous discussions of natural evil see here.)

Instances of natural evil are not hard to come by. Consider, for example, this image of a young wildebeest being eaten by a hungry crocodile.

When we refer to natural evil as a problem we are referencing the notion that this kind of evil is inconsistent with or unexpected based on the existence of God (where God has the attributes described in classical theism including omnibenevolence, omniscience, and omnipotence).

This image illustrates two specific problems that arise with many instances of natural evil. You see, this poor wildebeest is one of more than a million which partake in a massive migration across the Serengeti every year. At one point in that journey, this vast mass of bovines arrives at the Mara River. In a mass stampede they begin to rush across … and thousands drown in the process. Countless more are killed and eaten by crocodiles. In the aftermath, the river is clogged by a sea of bloated corpses rotting under the searing African sun. (See, for example, this account of the devastation at The Atlantic.)

The annual wildebeest slaughter at the Mara River raises two issues pertaining to some forms of natural evil: scale and system.

Scale is easy to understand. While it is perhaps conceivable that God could have a morally sufficient reason to allow a handful of wildebeests to suffer every year, what are we to think of thousands facing a watery grave on an annual basis? Carnage on that scale seems difficult to justify.

Interestingly, the article from The Atlantic points out that scientists have discovered this mass carnage is a boon for the Mara River ecosystem as these many dead animals nourish countless more creatures in and around the river while enriching the soil and the verdant flora. From that perspective, one might point out that nature wastes nothing. Carnage of natural evil on a scale orders of magnitude beyond the mundane also provides for the ecosystem goods orders of magnitude beyond the mundane.

Perhaps this is often true, but it nonetheless brings us to the second problem: system. This annual catalogue of misery is a part of the healthy functioning of the ecosystem. But why? Why would God design a system that demanded this level of suffering and death simply to function optimally?

Let’s shift our gaze from the Serengeti to a factory. Imagine that we are told this factory must employ small children to reach into the gears of the large machines regularly to remove the broken teeth of the sprockets. The system works well for the most part. But on the downside, small children periodically lose their arms as a result: several a year in fact.

If I were to tell you that the engineer who designed the machines was the greatest engineer imaginable, you’d rightly balk at the notion: no perfect engineer would design machines that required the occasional child’s arm for the proper functioning of the system.

True enough. And by the same token it would seem that one can reasonably think that no perfect designer of creation would design an ecosystem that required the mass annual slaughter of wildebeests.