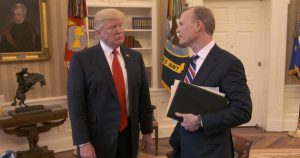 This past week Donald Trump had a bizarre interview (one of several) with John Dickerson of Face the Nation in which Trump derided Face the Nation in a sophomoric pun as “Deface the Nation.” (Of all the neofacist attempts to discredit the media this must surely count among the lamest.)

Dickerson is an eminently professional journalist who refused to engage in Trump’s insults. And when Trump reiterated the discredited “surveillance” charge against Obama, Dickerson politely but forcefully asked Trump to explain the charge. Like the big baby he is, Trump huffed and puffed and then ended the interview and walked over to his desk to pout. (That’s no exaggeration. Here’s the transcript.)

Stephen Colbert is friends with Dickerson, and that evening on his opening monologue for The Late Show he responded with an impressive harangue of Trump for his offensive behavior. That harangue included an offensive allusion to Trump performing oral sex on Putin:

“Sir, you attract more skinheads than free Rogaine. You have more people marching against you than cancer. You talk like a sign language gorilla who got hit in the head. In fact, the only thing your mouth is good for is being Vladimir Putin’s (expletive) holster.”

As you may have heard, this final quip was sufficiently offensive that it has earned an investigation from the FCC.

So did Stephen Colbert go too far? Yeah sure, of course.

However, let us not countenance the absurdity that his statement was “homophobic.” Rather, his comment was a provocative metaphor along the lines of “brown-nosing,” one which indicts Trump’s inexplicably servile, obsequious attitude toward the despot of Russia. Even now Trump will still say nothing bad about this wicked man who suppresses the free press even as he cultivates his own corrupt petty fiefdom. Why is that?

And that’s the point. Focusing on the offense of Colbert’s metaphor while ignoring the conditions that precipitated the metaphor is straining gnats and swallowing camels.