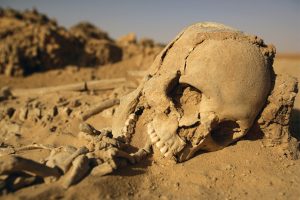 In his 2005 book Free of Charge: Giving and Forgiving in a Culture Stripped of Grace theologian Miroslav Volf provides a penetrating reflection on the extraordinary challenge and inestimable rewards of acquiring a robust understanding of grace and forgiveness.

I first became aware of Volf’s book some years ago when I was critiquing evangelical apologetic readings of the Yahweh wars described in biblical passages like Deuteronomy 20, Joshua 6, and 1 Samuel 15. At the time I encountered a passage from Volf discussing the divine wrath cited in Christopher Wright’s The God I Don’t Understand and Paul Copan’s Is God a Moral Monster? In this article I want to critique Copan’s citation of Volf on divine wrath as a way to defend Canaanite genocide. We can set the scene by considering a couple excerpts from Copan:

“We sensitized Westerners wonder why God gets so angry with Israel. Why all the judgment and wrath? Why does the Old Testament seem so undemocratic? … Perhaps we need to be more open to the fact that some of our moral intuitions aren’t as finely tuned as they ought to be. The same may apply to our thoughts about what God should or shouldn’t have done in Canaan.” (192)

Here’s the essence of Copan’s claim: the moral problem created by the divine command to eradicate the entire Canaanite population (what we today call genocide) can be greatly ameliorated if not removed altogether if we reconsider the moral intuitions that underlie the objection. How so? To make the point, Copan quotes Volf’s reflection on divine wrath:

“I used to think that wrath was unworthy of God. Isn’t God love? Shouldn’t divine love be beyond wrath? God is love, and God loves every person and every creature. That’s exactly why God is wrathful against some of them. My last resistance to the idea of God’s wrath was a casualty of the war in the former Yugoslavia, the region from which I come. According to some estimates, 200,000 people were killed and over 3,000,000 were displaced. My villages and cities were destroyed, my people shelled day in and day out, some of them brutalized beyond imagination, and I could not imagine God not being angry. How did God react to the carnage? By doting on the perpetrators in a grandparently fashion? By refusing to condemn the bloodbath but instead affirming the perpetrators’ basic goodness? Wasn’t God fiercely angry with them? Though I used to complain about the indecency of the idea of God’s wrath, I came to think that I would have to rebel against a God who wasn’t wrathful at the sight of the world’s evil. God isn’t wrathful in spite of being love. God is wrathful because God is love.” (Free of Charge: Giving and Forgiving in a Culture Stripped of Grace (Zondervan, 2005), 138-139, cited in Copan Is God a Moral Monster? Making Sense of the Old Testament God, Baker, 2011), 192.)

Next, Copan unpacks Volf’s evocative challenge to our notions of God:

“Maybe the ideal ‘God’ in the Westerner’s mind is just too nice. We’ve lost sight of good and just while focusing on nice, tame, and manageable. We’ve ignored sternness and severity (which make us squirm), latching on to our own ideals of comfort and convenience. We’ve gotten rid of the God who presents a cosmic authority problem and substituted controllable gods of our own devising. We’ve focused on divine love at the expense of God’s anger at what ultimately destroys us or undermines our fundamental well-being.” (192-3)

Countless Christian authors have made the same general point that we often attempt to “tame” God based on fallible and self-serving intuitions. (See, for example, Mark Buchanan, Your God is Too Safe: Rediscovering the Wonder of a God You Can’t Control (Multnomah, 2001).) Fair enough. I have no problem with the general point. Our intuitions are fallible. And they are also often self-serving. The tendency to remake God in our image is a perennial danger.

But here’s the problem: the observation that our intuitions are fallible and often self-serving also has obvious limits. That point does not offer carte blanche to justify any behavior which violates those moral intuitions. As a case in point, when avowedly Christian Hutus were massacring the Tutsi population of Rwanda, who among us would ever consider a defense offered in the terms presented by Paul Copan? Imagine the apologist of the Rwandan genocide reasoning like this:

“You have a problem with Hutu villagers massacring their Tutsi neighbors with machetes? Well maybe the ideal ‘God’ in the Westerner’s mind is just too nice. We’ve lost sight of good and just while focusing on nice, tame, and manageable. We’ve ignored sternness and severity (which make us squirm), latching on to our own ideals of comfort and convenience…”

Would such reasoning cause us to reconsider our moral condemnation? On the contrary, we would repudiate such an apologetic defense categorically not only as absurd but as an affront to our most deeply held moral intuitions. If we know anything morally we know that it is wrong to slaughter an entire civilian population from newborns to the aged. And to suggest, as Copan clearly does, that our aversion to the butchering of infants and the elderly is a manifestation of our sinful and self-serving dispositions to recreate God in our image is nothing short of absurd.

In conclusion, one should note the striking irony: Copan cites a passage in which Volf describes God’s rage at the indiscriminate genocide of a civilian population as the grounds to justify God’s commanding the indiscriminate genocide of a civilian population. Needless to say, this makes no sense. It is akin to an environmentalist organization retaliating against the environmental impact of an oil spill by sinking a loaded oil tanker.

I know Paul Copan and I respect him as one of the most thoughtful and pastoral Christian apologists working today. Nonetheless, I find the kind of defense he presents of Yahweh warfare and genocide to be utterly implausible and unhelpful. Far from addressing the problem of biblical violence and Yahweh warfare, such apologetic strategies only multiple moral difficulties.