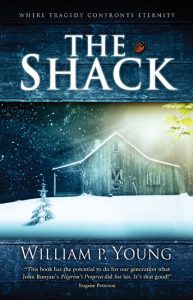 The book cover that should not have been.

Two days ago I came across this article at CBN: “Art Designer of ‘The Shack’ Book Cover Says He Regrets His Involvement.” In a Facebook post of three weeks ago, Dave Aldrich states that he lacked discernment when he agreed to illustrate the book cover for The Shack a decade ago. He now recognizes that the theology is “unbiblical”, that it distorts the Bible, and most of all that it teaches universal salvation.

Before we get to The Shack, I want to say a word about Young’s provocative new book titled Lies We Believe About God. In this book, Young does appear to endorse universal salvation:

“What or who saves me? Either God did in Jesus, or I save myself. If, in any way, I participate in the completed act of salvation accomplished in Jesus, then my part is what actually saves me. Saving faith is not our faith, but the faith of Jesus.

“God does not wait for my choice and then ‘save me.’ God has acted decisively and universally for all humankind. Now our daily choice is to either grow and participate in that reality or continue to live in the blindness of our own independence.

“Are you suggesting that everyone is saved? That you believe in universal salvation?

At this point Young goes on to argue that Christ has already secured the salvation of all and he refers the reader to a list of texts in support of his claim. I haven’t studied Young’s current views with any great care, but his statement of his views here appears to share much with Karl Barth’s understanding of Christology and election, though Barth backs off from endorsing universalism.

So for the purposes of our conversation, we can assume that Paul Young currently appears to endorse universal reconciliation in Christ. Please note that this does not entail a denial of hell. Young might well believe, for example, that people can continue to deny the life they have in Christ for an indefinite period of time both in this life and the next. And that self-imposed misery that results would be a self-imposed hell. (Young may address these issues elsewhere in his book. I’ve only read the relevant section for this article.)

Having said all that, I have several problems with Aldrich’s Facebook comments. First, The Shack does not teach universalism. It certainly has a hope of universal reconciliation, but then what kind of Christian wouldn’t hope for the reconciliation of all? (Answer: a bad Christian.)

Second, while Aldrich is correct to note that stories can teach theology, if you disagree with the theology of a book, the proper response is not to pull out the ole’ heresy stamp. Rather, it is to equip others with the skills of discernment. After all, even if The Shack has some error in it — and which book produced by mere humans doesn’t? — you engage it by discerning the truth from the error.

(I continue to remain bemused by the extent to which evangelicals tout C.S. Lewis, apparently oblivious to the theological positions he endorsed. Had Lewis lived today, no doubt John Piper would have tweeted “Farewell Clive Staples” a while ago.)

Aldrich’s indictment of The Shack is intended to reflect a new level of discernment that he apparently lacked when he created the cover for The Shack. But it seems to me that the evidence is quite the opposite: if anything, it is his current ill-formed response to the book which evinces a distinct lack of discernment.