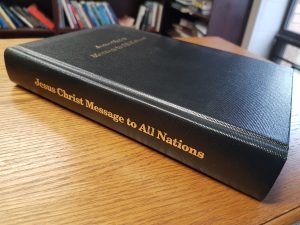 As a seminary professor, I get a lot of emails (probably 3-4 per week) from strangers who are peddling their new self-published book or who are simply keen to share their revelations about the end of the world or the evil of Islam or their new theory on X or Y. Over the years I’ve also received several unsolicited packages in the mail. In this article and the next I’m going to describe the two most interesting mailed gifts.

I’m devoting this first installment to a quick look at two sizable volumes of revelations I received in the mail from the Fundamentalist Church of Jesus Christ of Latter-day Saints. This is a splinter group from mainstream Mormonism led by Warren Jeffs. Jeffs was an unapologetic polygamist who apparently enjoyed bedding teenage girls. He was eventually convicted for his crimes and has since been sentenced to life in prison.

The volume pictured here is the first edition of Jeffs’ revelations which Jesus allegedly gave to him in prison between 2009-2012. The volume is over 800 pages and looks and sounds like biblish straight up. A year after I received this book in the mail I received a second edition which included 100 pages of new revelations. (Too bad Jesus didn’t tell Jeffs he wasn’t quite done talking or Jeffs could have avoided the hassle of sending out two editions.) Alas, Jeffs has, as yet, been unable to persuade the authorities who have imprisoned him that God is, in fact, on his side.

Jeffs’ book reflects the way many people think the Bible came about: namely, some folks felt themselves inspired and thereby became the mouthpiece for God. They signed their revelations “Thus saith the Lord!” and the rest is history. That may indeed be how Jesus Christ Message to All Nations came about, but that certainly doesn’t reflect the origins of the Bible.

On the contrary, the Bible is a diverse collection of literary texts that emerged in the warp and woof of history. This library includes legal texts, wisdom sayings, folk history, historical narrative, letters, songs, poems, proverbs, and other writings. These texts circulated in a variety of contexts and over decades and centuries were gradually recognized as having a unique authority as a divinely authorized canonical collection. (A few years ago I reviewed Yoram Hazony’s important book The Philosophy of Hebrew Scripture. If you’d like to read more about how approaching the Bible first as revelation has distorted our thinking about it, I strongly recommend that book.) So while Jeffs’ collection of “revelations” reflect a popular notion about how the Bible originated, it does not, in fact, reflect the reality.

If anybody is interested in purchasing either the first or second edition of Jesus Christ Message to All Nations I’ll be willing to let them go for $30 each (including postage).  I recognize that this might seem a bit steep (after all, you can purchase a copy on Ebay for 6 bucks). But I’m kind of partial to these volumes (they do make a marvelous door-stop), so the price is firm.