Yesterday I became aware of a nasty article by a fellow named “Eric Schneider” who has a blog devoted to destroying the reputation and ministry of Bruxy Cavey. The article was poorly argued and evinced little by way of analytic skills, biblical or theological knowledge, or a modicum of charity. So who is Eric Schneider? Does he have any professional affiliations or advanced degrees in theology? He doesn’t say. All he says on his blog description is that he is an “avid fisherman” and has an interest in “theology, apologetics, and history.”

Over the years I’ve seen many leaders and academics in the Christian community attacked and defamed by self-appointed heresy hunters like Eric. And like Eric, they generally lack any accountability for their actions. Sadly, the internet provides a marvelous place to slander Christian leaders from the comfort of one’s private study.

I wrote a response to Eric and posted a link at his blog. One day later, he has still refused to approve my comment so his readers can be made aware of a critical rejoinder to his screed. So I posted a second comment — also as yet awaiting moderation — on his blog: 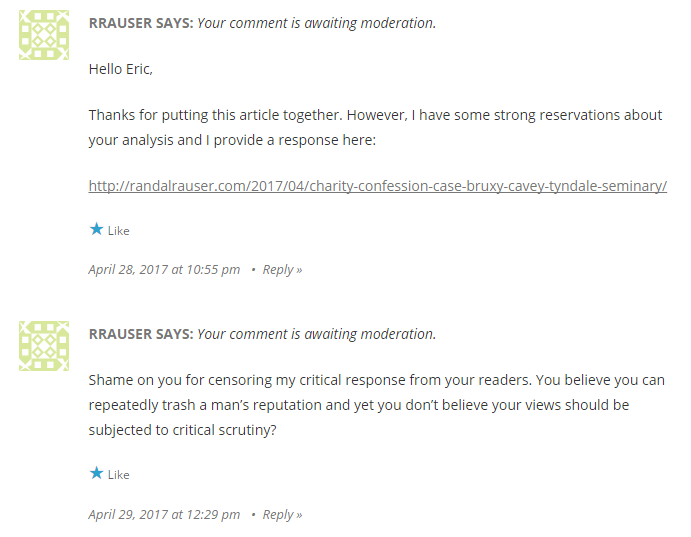 Eric did comment in response to my blog, however. It was an illuminating, if abortive, exchange. Here I’d like to focus on one essential point. Eric cites the first few minutes of the following excerpt from Bruxy Cavey teaching to illustrate that Bruxy allegedly rejects scriptural authority:

However, in the comment section (in response to another commenter) I pointed out that Eric appears to have fundamentally misunderstood Bruxy’s point. I then laid out a charitable interpretation of Bruxy’s comments as follows:

“I watched the entire clip from the beginning to 3:50 (at which point it advances to later in the lecture). And having watched that whole section it seems clear that Eric has simply misunderstood what Bruxy is saying.

“To make his point, Bruxy illustrates the problems with the inerrantist approach to authority by citing Bart Ehrman’s well-known story from “Misquoting Jesus” that his faith was shaken when he discovered a single error in the Gospel of Mark. Thus, Bruxy suggests, rooting biblical authority in inerrancy leads to an unstable faith which is liable to defeat with a single error.

“What he’s saying here sounds very much like Barth’s and Brunner’s Neo-orthodoxy.

“At the end of the section, He turns to Paul’s confession of all Scripture as being God-breathed and he notes that the point Paul draws from this is not that Scripture conveys inerrant facts but rather that it is useful for bringing about transformation in the individual who submits to it.

“Whether one agrees with Bruxy or not, it seems to me very misguided to think he is denying biblical authority simpliciter in a way that would put him at odds with the TSB. Rather, he is aiming to ground a proper biblical authority in the Bible’s divine source and its power to transform individuals into the image of God in Christ.”

I then asked Bruxy whether my synopsis was correct. Bruxy replied that it was, indeed, correct. This is what he wrote to me:

“[Yo]u are right on. Relative to other written sources, I say the Bible is authoritative. We have no other God-breathed sources like the Bible. We let the Bible have that place of authority in a way we do not grant any other book or prophet. But to a room full of people who already believe the Bible, I say that isn’t enough. Because the Bible records Jesus saying he is our great ultimate authority. And it seems to me (and I think other Anabaptists), that Reformed Christians back in the day (and maybe some today), have needed to have us find as many linguistic ways as possible to remind them to submit to Jesus’ authority rather than to the Bible in general, lest they keep using violence to fight for theological purity.”

So my interpretation of Bruxy was not only charitable, it was also correct. And thus there is demonstrably no conflict between this passage and the Tyndale Statement of Faith.

How do you think Eric responded to this irrefutable evidence that he had made a false claim against a brother in Christ? Did he say he would retract the charge based on the evidence provided? No, he did not. Instead, he posted this extraordinary comment:

“I take your accusation that I am uncharitably smearing a brother seriously and will think and pray on it, but at this point I really do not think that I am. If it is the case that I am guilty of this then I pray that God would show me that. Until that happens I do not intend to back down.”

“Praying is great, but that doesn’t excuse you from addressing the arguments I’ve presented.”

To suggest that one can avoid the evidence demonstrating they have professed falsely about another person by sanctimoniously appealing to “prayer” is the very definition of pharisaical behavior.

My penultimate word to Eric Schneider would be a matter of legal caution:

Mr. Schneider, you are disparaging the reputation of both Bruxy Cavey and Tyndale Seminary by suggesting Mr. Cavey is acting in bad faith by signing Tyndale’s Statement of Faith and that Tyndale is acting in bad faith by allowing him to teach. I’m no lawyer, but you could be opening yourself to a defamation lawsuit. One thing is clear: you have shown yourself to be a person lacking in some of the fundamentals of Christian character.

And my final word goes to the rest of us. Eric is engaged in bullying behavior. And as Barbara Coloroso has pointed out, bullying proceeds with a dynamic of three: the bully, the one bullied, and the bystander. The critical point to recognize is that by doing nothing, the bystander empowers the bully. If we are silent when self-appointed heresy hunters like Eric Schneider engage in character assassination, we are de facto empowering their bullying. There is no neutral stance here. When you see this kind of behavior, speak out and call the bully to account.