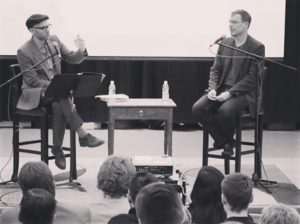 On Friday, March 10th I met Justin Schieber for our second public debate. (The first one unfolded exactly two years ago on the campus of the University of Alberta. You can watch that match-up here.)

Personally, I much prefer this approach. If the full-on formal debate is a pinched three piece suit, this semi-formal approach is a blazer and a relaxed button-down shirt: no tie required.

I have included the full audio for the debate below. Schieber included PowerPoint which, as you can probably guess, is unfortunately not visible in audio form. That’s why I included the picture above so that you can get a good sense of his PowerPoint presentation. 🙂

As for me, I didn’t have any PowerPoint. 🙁 But I did include a handout to go with my opening statement which I have included below: