I opened my 2011 book You’re not as Crazy as I Think by chronicling some of the myriad ways that evangelical Christians invoke the rhetoric of truth as a way of reinforcing binary in-group out-group oppositions. In our age of marketing identities, I noted that evangelicals have attempted to brand themselves and their communities with “truth”. And to drive the point home I cited several examples of books (e.g. Nancey Pearcy’s Total Truth; Art Lindsley’s tautologically titled True Truth) and curricula (e.g. Focus on the Family’s The Truth Project).

In my previous article “Evangelical and Atheist Communities: Closer than you might think,” I argued that evangelical and atheist communities in North America share many similar cultural traits. And the point carries through to this issue of branding. If evangelicals have often branded themselves and their communities with “Truth,” atheists regularly brand themselves and their communities with “Reason”. Alas, in neither case does the reality live up to the branding.

Evidence that atheists (secularists, humanists, etc.) brand themselves and their communities with “Reason” is not hard to come by. Consider, for example, the much touted “Reason Rally“, national events held in 2012 and 2016 in Washington, DC. 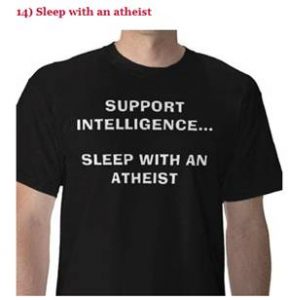 Or you could consider atheist kitsch like this t-shirt: “Support intelligence … sleep with an atheist.” A libertine sexual ethic and the rhetoric of Reason all in one short slogan. Effective branding indeed.

The problem, ironically enough, is that when you brand the in-group as “Reason” and align the out-group (e.g. the “religious”) with irrationality, you undermine the ability of your in-group to develop the very skills of critical thinking necessary for the exercise of reason.

As a case in point, consider my recent visit with Freethought Arizona in Tucson. As I noted in my account last week, the first question at that particular event was from an elderly gentleman who asked me when I was first indoctrinated. Why? Because that’s what you ask of the out-group, i.e. those who are unable to exercise “Reason”. Over the next 1 1/2 hours we returned to that theme time and again as I sought to undermine the binary opposition.

Was I successful? The event was recorded and should hopefully be put online in the next few weeks. I shall surely let you know when it is. At that point you can make your own judgment. But in the interim, consider the “critical” responses from a couple individuals at the Meetup posting for the event.

The first comment comes from a fellow named “Jim C” who says simply:

“You have to realize that ministers only speak in parables. They have nothing real to say.”

That’s Jim C’s assessment of my contribution to the conversation: I had nothing to say.

Note first that I am not a “minister”, nor was I introduced as such. Rather, I am a professor with an academic PhD from a leading British university and author of several peer-reviewed journal articles and books. Within this context, labeling me as a “minister” has the clear rhetorical function of marginalizing a voice from the out-group, thereby delegitimating that individual’s analysis. In other words, it has the exact same rhetorical function as an evangelical labeling a dissenting voice as a “liberal” or a “secularist”.

(I remember at this point William Lane Craig’s debate with philosopher Richard Taylor. Although Craig has two earned PhDs, Taylor insisted on referring to him with the puerile insult, “the Reverend Mr. Craig.”)

Although I provided careful analysis and evidence to support my opinions (i.e. I exercised reason), Jim C marginalizes my entire presentation by saying I spoke in “parables” and thus that I really “have nothing to say.” I suspect that Jim C is also alluding to Jesus’ statement in Matthew 13:13: “This is why I speak to them in parables: ‘Though seeing, they do not see; though hearing, they do not hear or understand.'” If Jim is making this allusion, then presumably he is claiming I speak in “parables” in order to obfuscate (which is presumably Jim’s takeaway from Jesus’ words). Needless to say, there is no attempt from Jim C to exercise reason in order to justify his analysis, still less to engage critically what I actually said.

“Jim I agree with you 100 %. He [Randal] kept redefining words as a method of never coming to the point and addressing the question that was asked of him. He sounded like a politician. He reminded me of Bill Clinton in when Clinton tried to define what “the the word is – is….” verbal manipulation.”

Cheryl seems to interpret Jim’s reference to parables as an attempt on my part to obfuscate. Note that Cheryl Bene provides no examples to support her claims. And so, instead of engaging with my arguments she attacks my character, in essence charging me with bullshitting, i.e. with manipulating language in a flagrant disregard for truth.

The irony here is that I prefaced this entire exchange by noting how atheists and Christians regularly marginalize the out-group by impugning their motives, i.e. by charging members of the outgroup with irrational and/or immoral conduct. And I emphasized the need to move beyond such rhetorical marginalization with the admirable case of a dialogue between Pope Francis and Jose Mujica, atheist and one-time president of Uruguay.

But old habits die hard, it would seem. Instead of choosing to recognize that reasonable folks of good character can exist in the “religious” outgroup, Cheryl Bene opts to impugn me as being engaged in an immoral exercise of bad faith, of attempting to obfuscate to maintain my own irrationality.